Snacking at the wrong time of day interrupts the body's food clock. 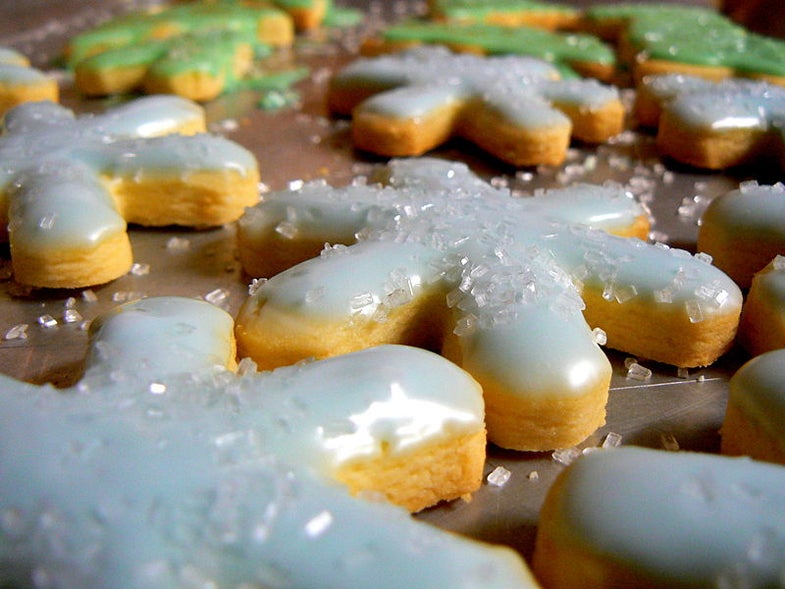 Blue-spectrum light and weird work schedules can easily interfere with our bodies’ master clocks, but did you know that food can, too? All those cookies and pies you’ve been eating this week are going to mess with your sleep, especially when you’re nibbling on them all day. Holiday travel will make it that much worse.

Researchers at the University of California-San Diego determined the molecular basis for the interruption of our “food clocks,” or food-entrainable oscillators. People who have jet lag or work night shifts–or Mars shifts–have the same problems.

Our bodies have master regulator genes that help us function according to natural circadian rhythms, and we can lose sleep when these are interrupted. Medical researchers are just figuring out how to re-train our bodies using natural cues, like blue light, to reset those disturbed clocks. Now a study led by Dr. Louis Ptacek of UCSF and the Howard Hughes Medical Institute explains how food gets involved.

The food clock, or more accurately food-entrained rhythms, exist to help our bodies manage our nutritional intakes. This system regulates genes that control functions like nutrient absorption and distribution, digestion, and so on. We bookmark the day according to when we eat, and interrupting these schedules can cause various problems. Other studies have shown that night shift workers and night owl eaters “exhibit depressed mood and impairment in cognitive function,” Ptacek and colleagues write.

Ptacek and fellow researchers hypothesized that a certain type of protein kinase (PKCγ) is involved in this process, and is critical to resetting the clock if eating schedules change. They gave normal mice food during the animals’ regular sleeping hours, and over time, the mice would wake up during the night in anticipation of their next meal. But mutant mice that lacked the PKCγ gene were not able to reset their clocks. It turned out that PKCγ binds to another molecule called BMAL and stabilizes it. This shifts the body clock’s time, the researchers say in their paper, published a couple weeks ago in the Proceedings of the National Academy of Sciences.

Understanding the molecular mechanism for how eating at the “wrong” time of the day desynchronizes our body clocks can lead to better treatments for people with night-eating syndrome, shift work and jet lag, Ptacek said.