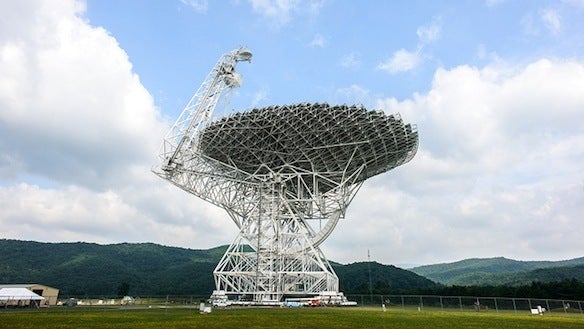 PopSci is pleased to present videos created by Motherboard, Vice Media’s guide to future culture. Motherboard’s original videos run the gamut from in-depth, investigative reports to profiles of the offbeat forward-thinking characters who are sculpting our bizarre present.

In the early 1930s, physicist Karl Jansky published stunning results of a study in which he detected radio waves emanating from the center of the Milky Way. Jansky’s work confirmed a suspicion long held by astrophysicists that the universe could be observed by measuring electromagnetic frequencies outside of the range of visible light. By eliminating limitations of traditional telescopes — like the difficulty of grinding perfect glass lenses, and avoiding peering through our dusty, murky atmosphere — radio telescopes promised astronomers deeper views into space than seen before.

In 1956, the National Radio Astronomy Observatory (NRAO) was formed in Green Bank, West Virginia, and became the hotbed of radio astronomy in the United States. The Green Bank site was chosen partially because of one major drawback of radio astronomy: The radio signals recorded by telescopes are so faint that any outside electromagnetic (EM) emissions can ruin data. Green Bank, being rural and mountainous, offered a perfect location to shield sensitive telescopes from any interference.