Curiosity rinses its instruments with three washes of sand to decontaminate itself before doing science. 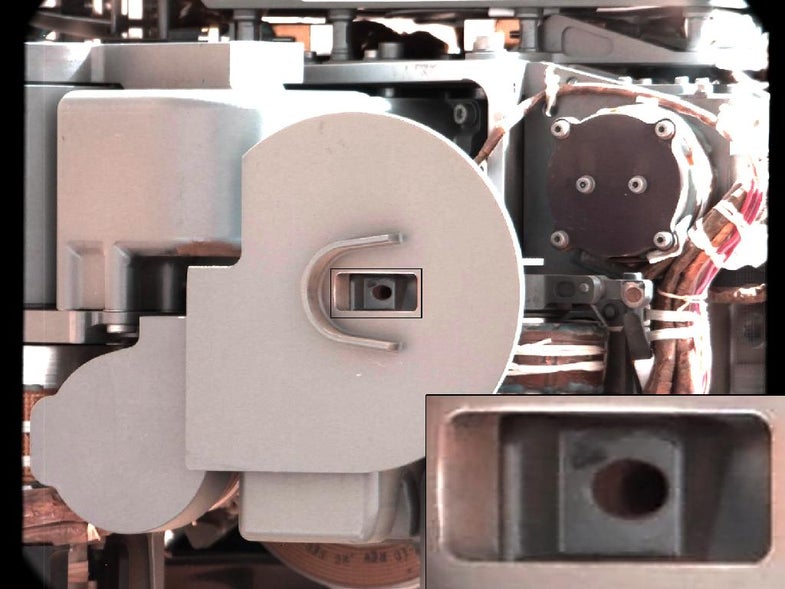 Today on Mars, Curiosity is cleaning itself out and preparing to study some sand. This image from Curiosity’s Mast Camera shows the rover just after it discarded a soil sample as part of its first decontamination exercise. The rover’s Collection and Handling for In-Situ Martian Rock Analysis (CHIMRA) tool on the end of its arm had just finished shaking some scooped-up Martian soil into the rover’s science-sampling chambers. You can see some dirt left behind in the delivery tube, which is magnified at bottom right.

The sand is used to scrub the internal surfaces of the rover, serving as a quality-assurance protocol just in case anything from Earth was left over in there. Then the rover spits the sample back out.

When the decontamination process has been performed three times and actual sample distribution is ready, the rover will send sand to its Chemistry and Mineralogy (CheMin) and Sample Analysis at Mars (SAM) instruments.

This image was taken by Curiosity’s right Mast Camera on October 10, the 64th sol since Curiosity landed in Gale Crater. Scientists white-balanced it to show the scene as it would appear under Earth-like lighting conditions–Mars is much less sunny, being a few hundred million miles further from our star.