The big rockets of our day get all of the fanfare during a launch, but often they’re accompanied by tiny... 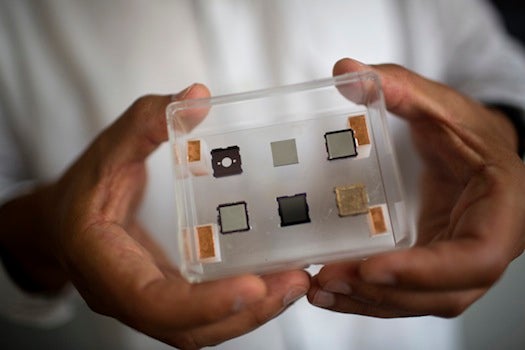 Paulo Lozano holds a case displaying the construction phases of small thruster made of silicon, gold, and porous metals that will be used in orbit on small satellites. Lozano is the Associate Director of the Space Propulsion Lab and an Associate Professor of Aeronautics and Astronautics at MIT in Cambridge, Massachusetts, USA. Lozano's current research focuses on the development of small thrusters for satellites. The thrusters his lab has developed are about the size of a single die cube and contain enough fuel to power the thrusters for a year in space. The thrusters will be used on small satellites. M. Scott Brauer
SHARE

The big rockets of our day get all of the fanfare during a launch, but often they’re accompanied by tiny stowaways known as CubeSats, which hitch a ride and drop into orbit. They’re convenient and able to get us into space cheaply, roughly the size of a Rubik’s Cube and weigh only three pounds. A potential problem with them, though, is there’s no way to control them once they’re gone, and when we keep sending them farther from terra firma, they could pile up in space. To nip that problem in the bud early, an MIT professor has developed penny-sized thrusters that could help us take them down ourselves.

Right now, the two dozen CubeSats in the atmosphere are fine; they retire, float for a while, then die burning up in the atmosphere. But if we want them to stay in a higher orbit (we do), they could stay there a lot longer, potentially cluttering up the orbit, or even causing collisions. To relieve any space congestion, Paulo Lozano, an associate professor of aeronautics and astronautics at MIT, has created miniature engines for the CubeSats that run on ion beams. They’re small, flat squares lined with 500 microscopic tips. When the tips are hit with voltage, they emit a stream of ions, enough of which can move the CubeSat along.

If we have those, we could drive the CubeSats into satellite seppuku, driving them down into the atmosphere once they’re done, or even better, use them to pick up the remans of other CubeSats, clearing the way for more satellites.