Video: Make Your Houseplant a Touchscreen? Or Theremin? What Is Going On Here

For people who like the Microsoft Kinect but also the simple joys of nature, the dream makers at Disney Research... 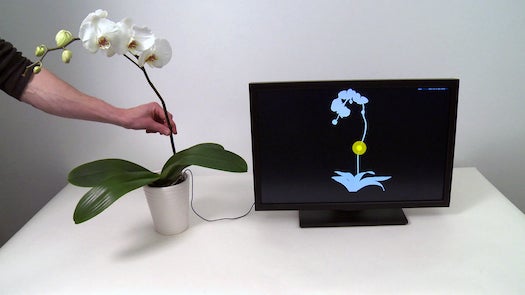 For people who like the Microsoft Kinect but also the simple joys of nature, the dream makers at Disney Research have just smashed together that particular peanut butter and chocolate into a magical (and very, deeply strange) new technology: plants that can register movements like a touchscreen, then display those movements, or use them to interact with an electronic device.

The project, nicknamed Botanicus Interactus, works when a wire is placed in the soil of a plant (either real or artificial). The technology monitors the plant, and can detect when something touches it. An electronic display can relay that information back, or it could work with another device like an iPod, turning on when a certain motion is detected. It’s built with the same sort of technology as the ubiquitous touchscreen, but works on multiple frequencies, instead of the usual single frequency. With that, it can pick up where it’s being touched and how hard.

So, yes, this is pretty weird, and it’s not entirely clear what the practical applications are yet, if any. We’ve seen similar projects come out of the Disney Research wing, including the interesting Touché project. But researchers are looking into the idea that other everyday objects could also be interacted with, maybe leading to a future where the barrier between electronics and everything else gets a little blurrier.