How Tablets Will Remake Television

The days of leaning back to watch TV have ended. Eighty-eight percent of tablet owners say they use the device... 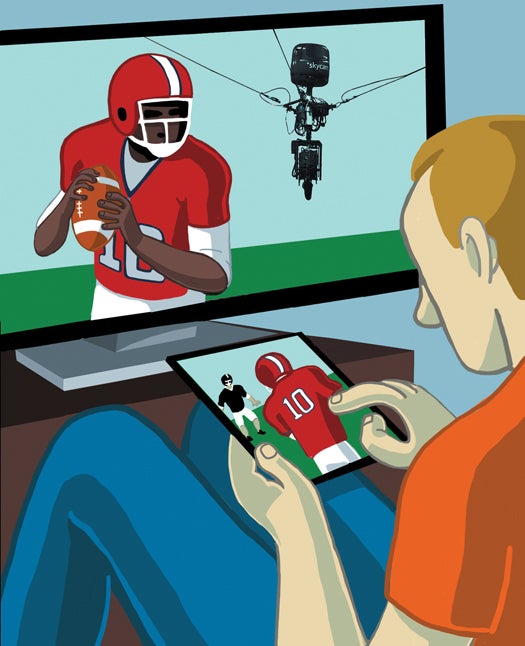 The days of leaning back to watch TV have ended. Eighty-eight percent of tablet owners say they use the device in front of the tube; they find tweets, news, video and other information related to the program they’re watching. Afraid of losing eyeballs, networks have released dozens of one-off apps with additional programming content. But that means that viewers must hop from app to app, distracting themselves even further from the TV-viewing experience. Now app developers are starting to take a new approach, one that allows tablets to communicate directly with Wi-Fi-enabled TVs and set-top boxes. The result could fundamentally change how viewers experience TV.

Second-screen apps are a relatively new phenomenon. The first generation, which came out last year, focused on making viewing more social. ZeeBox, an iOS and Android app that launched last November, pulls TV listings from the cloud, and users “check in” to whatever program they’re watching. Each show page displays related tweets and Facebook status updates. Yet it’s up to the user to check in to a new show when he changes the channel.

Newer apps do away with manual input and instead use a TV’s audio to identify shows. Similar to music-identifying apps such as Shazam, the services sample audio from the TV about every 50 milliseconds and cross-reference that sound with an existing audio library. The apps can recognize what a person is watching in four seconds and then aggregate related content, including Twitter feeds, news stories, screenshots, clips and soundtracks. IntoNow, a start-up that Yahoo! purchased last spring, and California-based ConnecTV have had the most success. IntoNow is so accurate, in fact, that it can tell a baseball game at Yankee Stadium from one across town at Citi Field. But audio syncing is only a stopgap; even the most precise tablet algorithm is no match for a noisy room.

The environment doesn’t affect a wireless signal, which provides set-top-box distributors, including cable and videogame companies, with a seamless conduit for second-screen content. When a TV or set-top box and tablet are on the same Wi-Fi network, they can recognize each other’s activities. Last year, DirecTV became the first cable company to stream extra programming information from the cloud over Wi-Fi. When open, the iOS app recognizes which channel the set-top box is tuned to and calls up video, stills and in-depth bios on the cast and crew.

Soon producers will be able to customize the information that flows to the tablet screen. DirecTV plans to give networks the code for its app. Developers could use it, for example, to add a second camera angle to a scene or provide updates on other in-progress games during an NFL broadcast—all delivered from the cloud over Wi-Fi.

The experience won’t be limited to broadcast. Later this year, Microsoft will release the Xbox SmartGlass app. The company will allow developers from video-on-demand services like HBOGo and videogame makers like Electronic Arts to create custom dual-screen experiences delivered through SmartGlass. One source will drive both screens, and viewers will once again be able to sit back and relax—even with their tablets.