Electronic Sutures Can Check For Infections and Even Help Wounds Heal

Stitches deserve a makeover. We’ve been using them in some form for thousands of years. So while they’ve stood the... 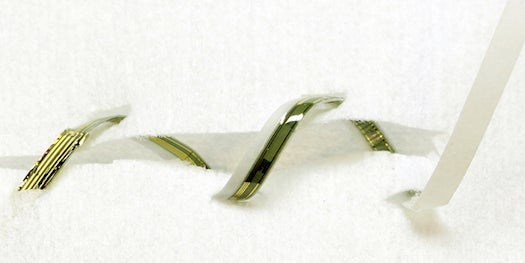 Stitches deserve a makeover. We’ve been using them in some form for thousands of years. So while they’ve stood the test of time, a researcher from the University of Illinois at Urbana-Champaign is wrestling surgical sutures into the future by creating “smart” electronic versions. They can monitor sutured sites for infection, and even help in the healing process.

First reported in the journal Small, the sutures, invented by professor John Rogers, use ultrathin silicon sensors attached to polymer or silk strips. Those sensors, once the sutures have been threaded through the skin, can detect if the would site is above room temperature, an indication of infection. Even better, they can help with that infection by heating the site, which (maybe counterintuitively) has been shown to help heal infections. A silicon diode and platinum nanomembrane resistor are used as the heat sensors; simple gold filaments with a current run through them are the heaters.

To make the tiny sensors, researchers use chemicals to slice a tiny piece of silicon from a silicon wafer, then use a rubber stamp to transfer the nanomembranes to polymer or silk strips. Metal electrodes and wires are added to the top, and the device is covered in epoxy coating.

It’s an impressive step forward for an old technology, sure, but it could go even further one day by releasing drugs into a site on command.