A Working Assault Rifle Made With a 3-D Printer

Making weapons at home just got much easier 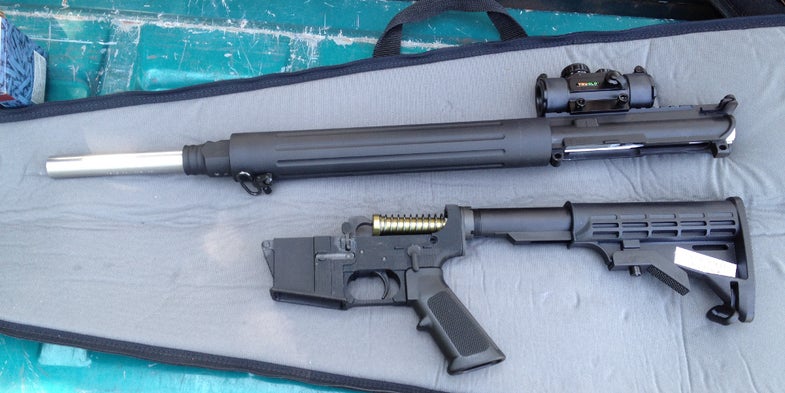 Get ready. It’s now possible to print weapons at home.

An amateur gunsmith, operating under the handle of “HaveBlue” (incidentally, “Have Blue” is the codename that was used for the prototype stealth fighter that became the Lockheed F-117), announced recently in online forums that he had successfully printed a serviceable .22 caliber pistol.

Despite predictions of disaster, the pistol worked. It successfully fired 200 rounds in testing.

HaveBlue then decided to push the limits of what was possible and use his printer to make an AR-15 rifle. To do this, he downloaded plans for an AR-15 receiver in the Solidworks file format from a site called CNCGunsmith.com. After some small modifications to the design, he fed about $30 of ABS plastic feedstock into his late-model Stratasys printer. The result was a functional AR-15 rifle. Early testing shows that it works, although it still has some minor feed and extraction problems to be worked out.

HaveBlue has also been testing the “marketplace” for 3-D printing weapons. To do this he asked Thingiverse, the 3-D design sharing site run by Makerbot Industries, whether it was permissible to post weapons designs or not. According to HaveBlue, Makerbot’s senior leadership decided to not disallow, but to discourage, the posting of weapons designs. Haveblue then posted a design for an AR-15 part on Thingiverse, but in the intensive legal discussion that followed Haveblue’s posting, Thingiverse decided to ban weapons designs outright. However, since Haveblue’s design is still on the site, it’s unclear whether Thingiverse is enforcing a ban or not.

While there are still some details to sort out, it’s pretty clear that making weapons at home using 3-D printers from commonly available materials is going to become much more commonplace in the near future. In fact, as 3-D printing technology matures, materials feedstock improves, and designs for weapons proliferate, we might soon see the day when nearly everyone will be able to print the weapons of their choice in the numbers they desire, all within the privacy of their own homes.