The kind of accurate geolocation offered by Global Positioning Systems has typically been difficult to apply indoors because metallic structures... 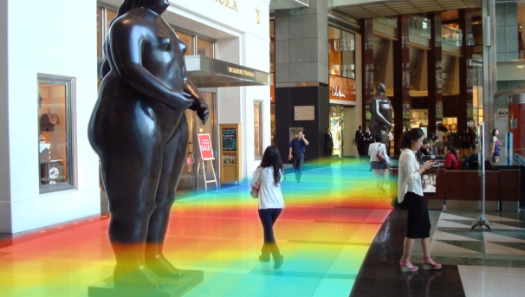 The kind of accurate geolocation offered by Global Positioning Systems has typically been difficult to apply indoors because metallic structures like buildings disrupt the Earth’s magnetic field, rendering compasses like the one found in many smartphones useless when inside. So map- and app-maker IndoorAtlas decided to spin these magnetic disturbances into something useful. Via an upcoming smartphone app, the company has created a way for users to navigate indoors using those very magnetic disturbances as their guide.

It works fairly simply (you can see just how simply in the video below). A map maker–which can be anyone, really–takes a building’s blueprint or floorplan and imposes it on a traditional map, like a Google Maps satellite image. Then the mapmaker simply walks along the passageways inside the building with smartphone in hand to chart the magnetic variations within the building as he or she goes. This magnetic map is then uploaded to IndoorAtlas’s database.

Once the map is made, visitors to the building can download the map to their phones and use it to navigate the floorplan of the building. Unlike other proposed indoor navigation systems that we’ve written about previoulsy, it doesn’t require any additional hardware to be installed in the building, like Bluetooth nodes or Wi-Fi. And because virtually anyone with access to a floorplan can be a mapmaker, the potential for the number of available maps to proliferate quickly is high. A visual explainer is below.