Seeing Through Walls With a Wireless Router

In the 1930s, U.S. Navy researchers stumbled upon the concept of radar when they noticed that a plane flying past … Continued 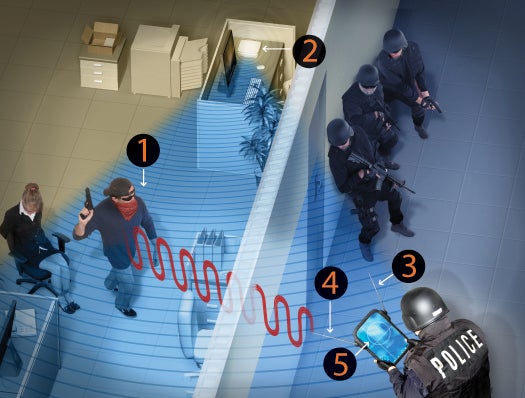 In the 1930s, U.S. Navy researchers stumbled upon the concept of radar when they noticed that a plane flying past a radio tower reflected radio waves. Scientists have now applied that same principle to make the first device that tracks existing Wi-Fi signals to spy on people through walls.

Wi-Fi radio signals are found in 61 percent of homes in the U.S. and 25 percent worldwide, so Karl Woodbridge and Kevin Chetty, researchers at University College London, designed their detector to use these ubiquitous signals. When a radio wave reflects off a moving object, its frequency changes—a phenomenon called the Doppler effect. Their radar prototype identifies frequency changes to detect moving objects. It’s about the size of a suitcase and contains a radio receiver composed of two antennas ­and a signal-processing unit. In tests, they have used it to determine a person’s location, speed and direction—even through a one-foot-thick brick wall. Because the device itself doesn’t emit any radio waves, it can’t be detected.

Wi-Fi radar could have domestic applications ranging from spotting intruders to unobtrusively monitoring children or the elderly. It could also have military uses: The U.K. Ministry of Defence has funded a study to determine whether it could be used to scan buildings during urban warfare. With improvements, Woodbridge says, the device could become sensitive enough to pick up on subtle motions the ribcage makes during breathing, which would allow the radar to detect people who are standing or sitting still.

See image above for how it’ll work.

2. REGULAR OL’ ROUTER
A Wi-Fi Internet router already in the room fills the area with radio waves of a specific frequency, usually 2.4 or 5 gigahertz.

3. BASELINE SIGNAL
One antenna of the radar system tracks the baseline radio signal in the room.

4. SHIFTED SIGNAL
A second antenna detects radio waves that have reflected off of moving objects, which changes their frequency.

5. PERP, SPOTTED
By comparing the two antennas’ signals, the computer calculates the object’s location to within a few feet as well as its speed and direction.

It’s possible to detect a person’s breathing rate by surrounding him with radio waves. Neal Patwari’s wireless engineering group at the University of Utah designed a network of 20 inexpensive radio transmitters that are placed around a patient’s bed. Then they created an algorithm that detects a stationary person’s breaths better than current detectors do. Patwari plans to upgrade the algorithm by the end of the year to filter out body movements too. The system could someday be used in hospitals in place of tubes and masks.