Most cell phones are pretty good at auto-correcting the errant spelling and punctuation that can ensue when you’re typing while... 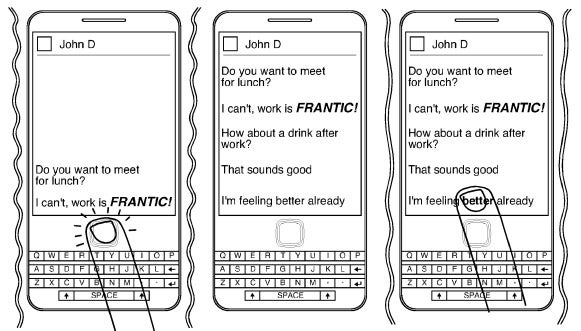 Most cell phones are pretty good at auto-correcting the errant spelling and punctuation that can ensue when you’re typing while furious, or sad, or gleeful. But what if the messages you’re sending could also convey those emotions embedded in your words? RIM filed a patent for just such a messaging system, which can determine the emotional context of a text in a way that goes beyond the little 🙂 we all know.

It would use a BlackBerry’s accelerometer, front-facing camera, pressure sensors and even future galvanic skin-response sensors to gauge a person’s emotional state. Galvanic sensors could tell a person’s heart rate, blood pressure and other biometric data, which could be used to figure out how they’re feeling.

The emotional context of the entered text might be determined as it’s being typed, or maybe after the fact. Then software would change the way the text is presented to convey the assumed emotion.

Say, for instance, you’re too busy to meet a friend, and this is incredibly frustrating and angst-causing. Judging by the haphazard way your fingers stab the keyboard, your anguished expression read by the camera, and maybe the phone’s trembling in your hand, your phone figures out you are agitated. Your phrase “Work is frantic” is translated into an angry, slanty font, red letters and a larger print. Maybe later you’re excited and happy — your text becomes pink or yellow.

RIM explains in more detail in its patent application, posted today at the U.S. Patent and Trademark Office.