NASA’s Wide-field Infrared Survey Explorer may be running out of coolant, but its infrared sensors are still capturing some amazing... 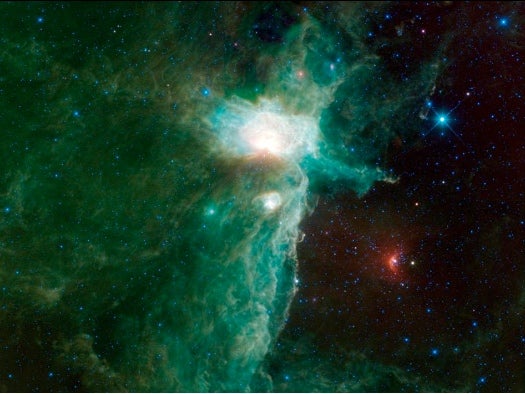 NASA’s Wide-field Infrared Survey Explorer may be running out of coolant, but its infrared sensors are still capturing some amazing infrared views of the cosmos. Today in pretty space pics: the Flame nebula, a burning candle lighting up the larger Orion complex close to its well-known belt.

This newly released image is part of WISE’s most recent data dump representing its second full scan of the sky. WISE wrapped its primary mission last March, providing one of the most comprehensive views ever taken featuring infrared images of more than half a billion objects. Its second scan is icing on the cake, allowing astronomers to sharpen and double-check the data from the first scan even as WISE’s coolant–necessary for keeping its own heat from interfering with the IR sensors–slowly runs out.

In the image above, different colors represent different wavelengths of infrared light shining through the dense clouds of dust feeding a star-birthing frenzy. Huge stars within the cloud are carving out a cavity there, giving us the cosmic candle you see above (one central massive star, 20 times heavier than our sun, is responsible for a good deal of this glow). This first batch of data from WISE’s second sky scan cover about one-third of the sky.