The unmanned Japanese cargo vessel currently en route to the International Space Station is carrying more than the usual food,... 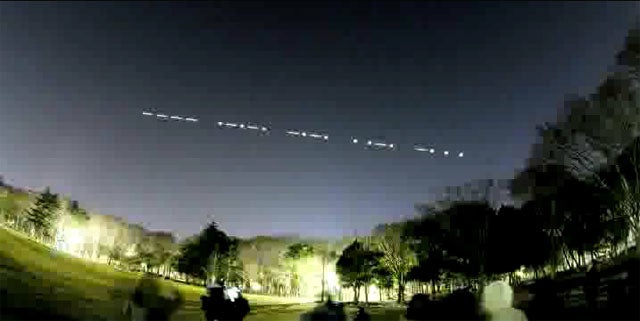 The unmanned Japanese cargo vessel currently en route to the International Space Station is carrying more than the usual food, water, and supplies to sustain the orbiting outpost. Tucked aboard the H-2 Transfer Vehicle are a set of small satellites, one of which will pulse Morse code messages in the night sky this September.

The compact satellites–known as cubesats–will conduct a range of scientific missions, but one in particular, FITSAT-1 (it was developed by Japan’s Fukuoka Institute of Technology, or FIT), will act something like an artificial star, issuing pulses of light from powerful LEDs that should be visible from Earth with the naked eye.

The point of all this is to investigate the potential for new kinds of optical communication with satellites. An FIT ground station equipped with a telescope and a photo-multiplier linked to an antenna will track the cubesat as it transmits text information to the ground via pulses of light set to Morse code, much as telegraph lines once linked disparate places via tones conducted through wires.

Scan the night sky in September, and you just might see it. FITSAT-1 is expected to deploy September 6.