Since the Scottish inventor Robert Thomson patented pneumatic tires in 1845, they have become standard on every vehicle with two,... 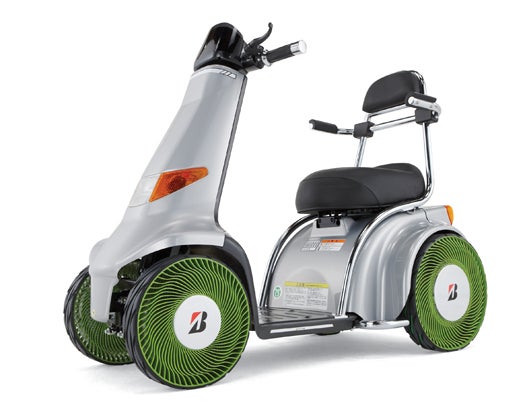 Since the Scottish inventor Robert Thomson patented pneumatic tires in 1845, they have become standard on every vehicle with two, four or 18 wheels. Pneumatic tires are now so durable that many drivers never even bother to check their air pressure. But the tires still have weaknesses, not least of which is the tendency to go flat.

Engineers at Bridgestone say their Airless Concept Tire could eliminate flats for good. The tire consists of a band of rubber tread wrapped around a dense web of thermoplastic spokes that radiate from a central aluminum wheel. To mimic the firm, springy feel of a pneumatic tire, engineers had to make the spokes stiff enough to avoid vibration (which wastes energy) yet soft enough to provide a comfortable ride. Guided by computer models, they wove the spokes into a lattice pattern that can bear the weight of the vehicle but will still give when the tire rolls over obstacles. Bridgestone says its design reduces rolling resistance, thus saving fuel. The tires are also easier to recycle: Unlike rubber, thermoplastic can easily be melted and remolded. 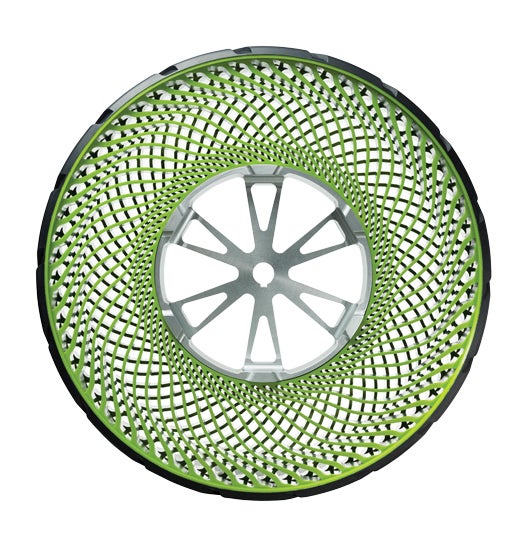 Bridgestone engineers are currently testing eight-inch-diameter airless tires for low-speed industrial applications such as carts and forklifts and developing a larger test version for passenger cars, but plenty of challenges remain. The engineers have to ensure that the tires are durable in extreme heat and cold. They will have to find a way to keep rocks, mud and snow from collecting in the spokes, which could unbalance the tire. Then the company must convince drivers to accept them. Not surprisingly, Bridgestone won’t say when the tires might appear in showrooms. But if they do reach the market, drivers could save fuel, never again change a flat, and start cutting down the heap of 300 million pneumatic tires that are scrapped in the U.S. every year.