Back in February Congress directed the Federal Aviation Administration to fast-track the integration of unmanned aerial systems into the U.S.... 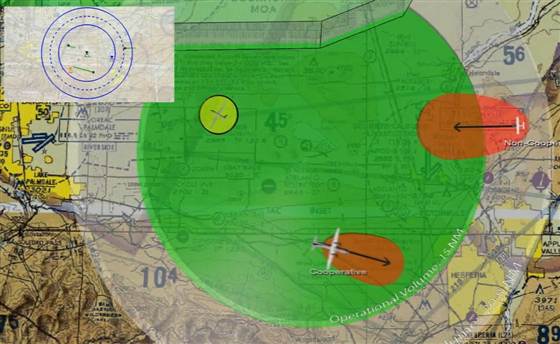 Back in February Congress directed the Federal Aviation Administration to fast-track the integration of unmanned aerial systems into the U.S. national airspace, but it didn’t tell the FAA how exactly to do this. To fly unmanned drones in shared airspace with conventional manned aircraft (or with other drones) is dangerous without a means for planes to know where other aircraft–manned and unmanned–are. Termed “sense and avoid” (or “see and avoid”) this technology is a key but difficult piece of our drone-enabled future, and the Army just took some huge steps toward making it a reality.

The Army just wrapped a two-week trial of its Ground-Based Sense and Avoid system (GBSAA), and the results were overwhelmingly positive. There are two ways to accomplish sense and avoid: either imbue every aircraft with the sensor technology or the autonomous smarts to know when it comes into close proximity with another aircraft, or create a ground-based system that acts as a kind of automated air traffic controller for drones, notifying UAVs and their pilots when they are on dangerous paths, prompting them to alter courses.

The Army has been testing the latter for use around its domestic bases via a series of “vignettes” in which it used live Shadow unmanned aircraft to demonstrate the viability of their system. In each trial, an aircraft under control by the GBSAA was threatened by an “intruder” aircraft entering the airspace. In each scenario, the system was able to recognize the potential danger in plenty of time and divert the drone under its supervision to a new path out of harm’s way.

For the Army, the system paves the way for fielding the system starting in March of 2014 at five bases, including Fort Hood in Texas and Fort Bragg in North Carolina. But in the larger domestic drone story, the milestone is significant as well. Functional sense and avoid systems have been a major obstacle in the path toward integration of unmanned systems into conventional airspace, and the lack of them is one reason large drones can currently only be flown with special permission from the FAA. If the Army’s sense and avoid algorithms are good enough to pass muster, civilian equivalents can’t be too far behind.