Video: Introducing Burritobot, the 3-D Printer that Fabricates With Frijoles and Queso

The beauty and promise of 3-D printing is really all tied to the end-user experience–if you can think of something,... 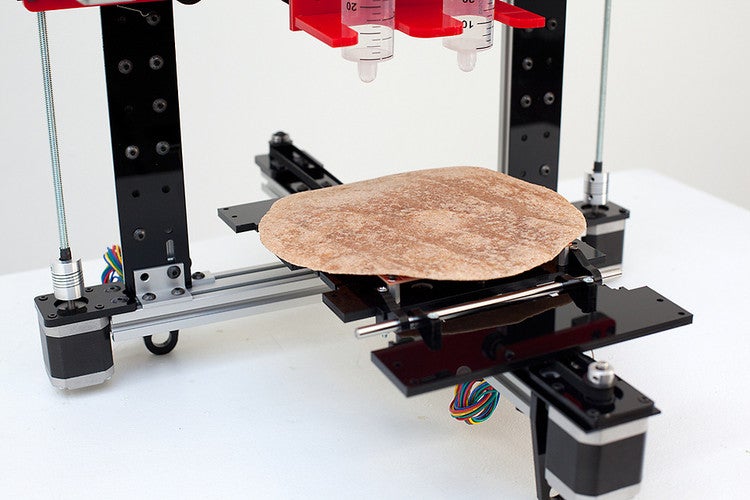 The beauty and promise of 3-D printing is really all tied to the end-user experience–if you can think of something, you can have it made specifically the way you want it to suit any specific need. And as NYU grad student Marko Manriquez says, “sometimes you really need a burrito.” Enter Burritobot, which is exactly what it sounds like.

For his thesis project for NYU’s Interactive Telecommunications Program, Manriquez decided to build something that is both decidedly future-leaning and something that would open up a dialogue about the things he holds dear, namely fabrication technologies and food issues. Burritos, he decided, lend themselves perfectly to his purpose.

Now in prototype, the Burritobot is controlled via an iOS or Ruby-based smartphone app on which the user can customize his or her burrito by selecting which extrudable ingredients he or she wants and using sliders to specify the proper ratio. Then, atop a standardized tortilla, the machine goes to work, using extruders mounted on a moving carousel to deposit the desired ingredients.

For now it’s a fun project, but Manriquez wants to keep it moving forward. While Burritobot may be fairly simple as 3-D printers go, the future of food production and food preparation, at least in the context of fast food, is robotic. Automation is coming to the restaurant industry–just the other day on the campaign trail Mitt Romney was extolling the virtues of the Northeastern (Pennsylvania, mostly) convenience store chain Wawa for its use of technology in the ordering of deli sandwiches via an interface no unlike the one Manriquez is working on–and Burritobot is a precursory glimpse of what the future of fast food might look like.

To this end, Manriquez is trying to raise a few dollars to keep the project developing. A Kickstarter campaign will begin in July, should any readers care to throw their financial backing behind a promising 3-D printing concept. At the very least you’ll get your name emblazoned on Manriquez’s “Tortilla of Gratitude.”