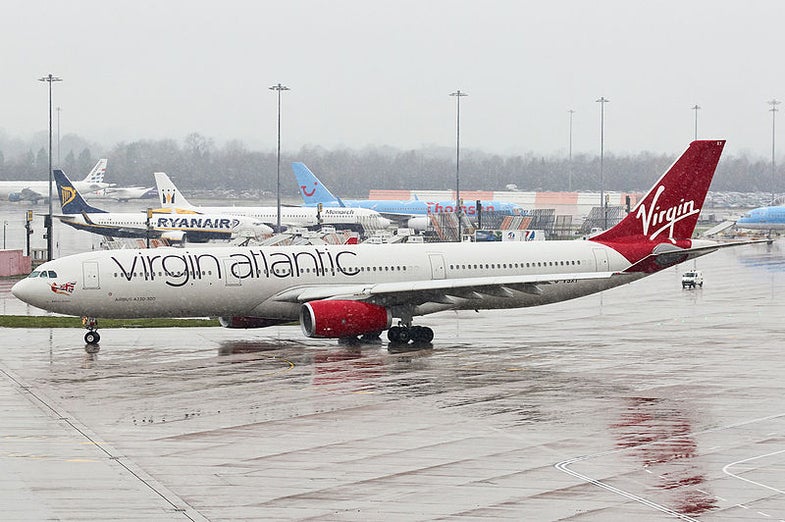 It was bound to happen and we can’t say we’re surprised that the forward-leaning Virgin Atlantic is the one doing it. As of yesterday passengers aboard Virgin’s new Airbus A330-300 aircraft flying London-NYC routes can use their cell phones to make calls from 35,000 feet. Customers will also be able to send text messages and access the Web via GPRS. The only restrictions on usage will be during takeoff and landing or within 250 miles of U.S. airspace.

The catch? The service will be available to only six callers at a time (due to low bandwidth across the satellite connection enabling this), and thus far it’s unclear exactly how Virgin is going to police the cabin to ensure everyone’s calls aren’t tripping over each other. Virgin envisions the system being used for “exceptional situations,” like when someone absolutely needs to get a call through to the office while trapped on a transatlantic flight.

Transatlantic flights, of course, are often overnight journeys. That will likely spell more noise in a cabin where most people are trying to sleep. Virgin therefore may have to restrict the times of day when passengers can take advantage of this new amenity. Add to that the fact that the system currently only works with European cell phone providers O2 and Vodafone and U.S. carrier T-Mobile, and you’ve basically got a new feature that works for only small number from an already limited group of passengers on a certain aircraft model flying a particular route at certain times of day.

However, Virgin’s in-flight calling capability will spread to nearly 20 planes by year’s end, the company says, and as the technology improves over time passengers can expect this capability to grow in terms of both cell service carriers and number of simultaneous callers allowed. Even the slow-to-embrace-change U.S. Federal Aviation Administration might get on board at some point, opening in-flight calling to U.S. airspace. There’s no telling if that’s a good thing or a really, really annoying thing– sometimes the best part about being airborne is also being unplugged. But working in the favor of those who prefer a silent seat-mate: international roaming rates apply.

It’s worth noting that Virgin isn’t the first airline to allow cell phone usage during flights, but it is the first major Western airline to do so. Dubai-based Emirates was the first carrier to allow in-flight calls back in 2008, and other Middle Eastern national and regional carriers have since followed suit.