Video: Quadrotor Drone Flies Around To Your Devices And Charges Their Batteries

Even though we’ve been able to keep in touch for long stretches of time since the advent of cellphones, there’s... 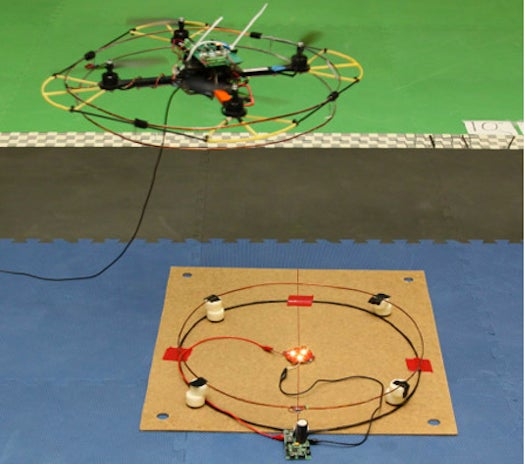 Even though we’ve been able to keep in touch for long stretches of time since the advent of cellphones, there’s still heaps of trouble with keeping them alive long enough to be any good. But wireless everywhere is the way of the future, and roboticists from the NIMBUS Lab at the University of Nebraska–Lincoln have a very futuristic solution: a flying, wireless quadrotor inductive charger.

It works like this: Two coils go on; one for the quadrotor and one for whatever you need charged. The quadrotor drives a current, which forms an oscillating magnetic field. The quadrotor can hover nearby enough to cause the receiver’s coil to resonate with the field, which induces a voltage the charging object can use. If it can keep close enough to the object, the quadrotor can send 5.5 watts of power with 35 percent efficiency — enough to power a lightbulb and still have some charge left over as change.

Not that the engineers only have lightbulbs or cellphones in mind for the project: An underwater robot sent down for data could return and recharge with help from the quadrotor, or an outdoor sensor could get electronic aid when there aren’t options for solar or grid power.