Piezoelectric devices promise to draw power from your footsteps or heartbeat, change the channel on your TV, and complete all... 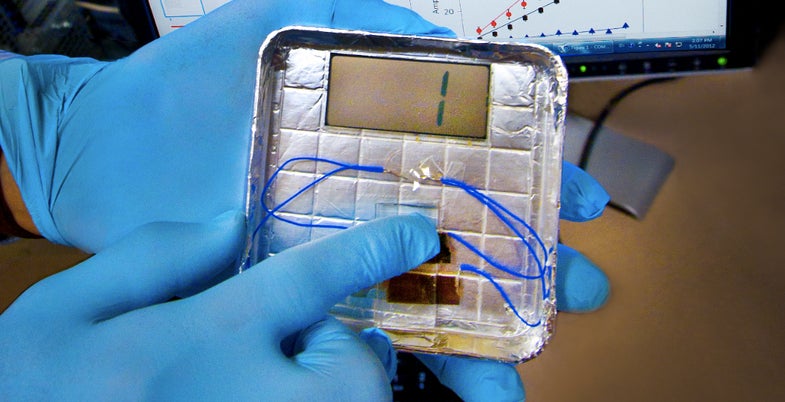 Engineered viruses convert an applied force into electricity in a new piezoelectric device, the first to use a biological material. Courtesy of Seung-Wuk Lee/Lawrence Berkeley National Laboratory
SHARE

Piezoelectric devices promise to draw power from your footsteps or heartbeat, change the channel on your TV, and complete all sorts of helpful tasks — but they generally work in the nano-mechanical realm, requiring synthetic materials to function. Now for the first time, scientists have built a piezoelectric device using biological materials — in this case, viruses. Future sneakers may come with a customized viral mat on the bottom, with millions of would-be pathogens working together to power your mp3 player.

Piezoelectrics use an accumulated charge in a solid material, which is generated in response to an applied stress. It holds promise for things like implantable medical devices, shoe-powered chargers and so on. Many new piezoelectrics use nano- or micro-structured materials that can be costly and toxic to work with, however. Scientists at Lawrence Berkeley National Laboratory wanted to test viruses’ ability to work as power generators, to see whether they could serve as constantly regenerating sources of power.

What’s more, viruses can be useful construction workers. We have seen other researchers using them to build solar panels, for instance. This is partly because of viruses’ proclivity for self-arranging, which can eliminate some of the laborious assembly processes required for nanoscale engineering.

Scientists led by Seung-Wuk Lee, a faculty scientist in Berkeley Lab’s Physical Biosciences Division, worked with a bacteria-attacking virus called M13, a rod-shaped phage that can be easily genetically modified and naturally orients itself into neatly ordered rows. It turns out the virus has piezoelectric properties, too. With some careful engineering that added negatively charged molecules, the team was able to boost the viral voltage and pile them up into a mat. A 20-layer-thick viral mat turned out to have the strongest piezoelectric effect.

The team tested their viral generator with a small LCD display, seen above. It works by tapping a finger on a small electrode, which has been coated with these engineered M13 phages. The phages’ proteins bend and twist in response, essentially converting the force of the finger-tap into electricity. It supplies about one-fourth the voltage of one AAA battery, according to LBNL. Not bad for a bunch of viruses.

The research appears this week in Nature Nanotechnology.