NASA Says: Please Don’t Touch Our Stuff When You Go to the Moon

Dear intrepid lunar explorers: NASA politely asks that, when you travel to the moon, you refrain from messing with the... 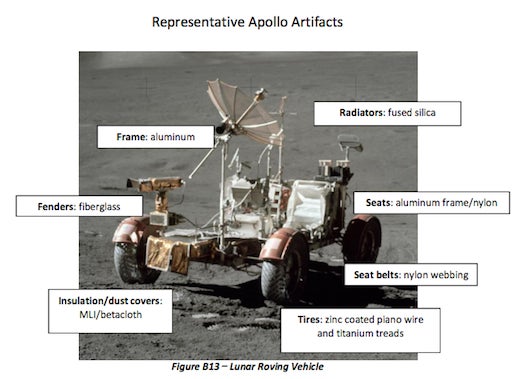 Dear intrepid lunar explorers: NASA politely asks that, when you travel to the moon, you refrain from messing with the American flag.

Google’s Lunar X Prize promises $20 million to whoever’s first to get a privately funded robot to the moon. But the folks at NASA don’t want any of the stuff they left up there getting messed up in the process, so they’ve offered a few handy guidelines for what to stay away from while you’re up there. (We’re looking at you, non-autonomous moon robots.)

The 93-page document, originally released in July but reasserted yesterday, reads like a user’s manual for private space shuttles, and contains a spectacular amount of both tech-talk and legalese.

“Please.” Because there’s a big disclaimer about how explorers aren’t bound by interplanetary moon law to listen to their requests. It’s a big, crater-filled Wild West out there, but the document still covers everything from guidelines for landing to low-altitude fly-bys of Apollo sites.

How necessary is this request? Probably at least a little necessary.

It’s safe to predict that more and more non-government entities are going to be making their way to the moon, as private travel becomes easier. And those are unique, historic golf balls up there.