Since the first high-definition televisions came out in 1998, consumers have heard the same tired sales pitch: “It’s like having... 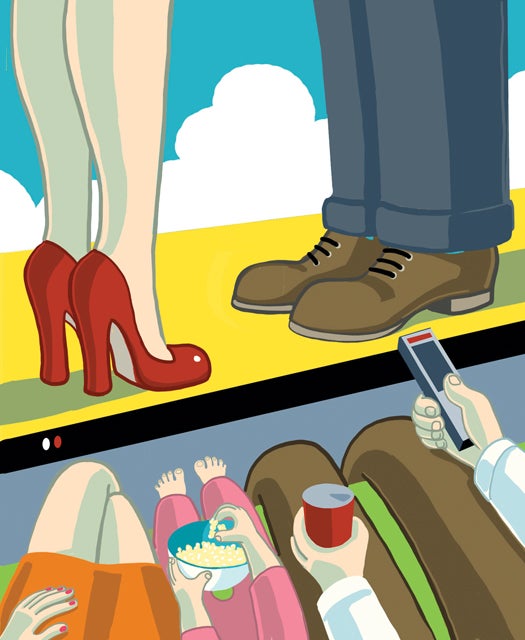 Since the first high-definition televisions came out in 1998, consumers have heard the same tired sales pitch: “It’s like having a movie theater in your living room!” Actually, no. An HD image does have nearly the same resolution as one projected in a theater. But when viewed on a large screen in a tight living room, the image’s quality degrades markedly. 4K, a resolution standard just beginning to reach consumer markets, promises to make possible the dream of any serious film fan—vast, perfectly crisp movies at home.

A 4K image has at least four pixels for every one in an HD image, allowing for video that’s 4,096 pixels wide versus only 1,920 pixels wide in HD. With more and smaller pixels, images will retain their quality both at large screen sizes and at close distances. For example, in the average living room, viewers sit as close as six feet from the screen. At that distance, a 100-inch 4K image will appear sharp and vibrant. At the same distance, a 100-inch HD image will appear grainy and pixelated.

The transition to 4K has already begun. In 2008, IFC Films debuted the first widely released full-length 4K film, Che, directed by Steven Soderbergh. Since then, Sony Pictures has released a handful of 4K movies, including The Green Hornet and Moneyball, and Warner Bros., 20th Century Fox and Paramount have also begun transitioning to dedicated 4K shooting. Meanwhile, the first consumer-grade 4K displays are just starting to come out. Sony and JVC introduced the first 4K home-theater projectors last September. LG says it will launch a 4K flat-panel LCD by next year, and Toshiba is likely to follow suit.

Just as with the transition to HD, mass adoption of 4K will be slow. Film companies must find easy and affordable ways to distribute it. In the short term, that will mean developing new file-compression standards. Next January, the Joint Collaborative Team on Video Coding will finalize a standard known as High Efficiency Video Coding. HEVC will compress files twice as efficiently as the current standard, MPEG-4 AVC, and will allow studios to fit a full-length 4K feature film onto existing media formats, such as Blu-ray discs.

Over the longer term, Internet service providers will need to improve their infrastructure to support 4K streaming. Today, broadband is fast and reliable enough—the average speed in the U.S. is now more than six megabits per second, and fiber connections can be even faster—for Netflix to deliver full-HD movies. Analysts estimate that 4K streaming will demand more than three times current speeds, at least 20 megabits per second on average. But that level of service is coming. South Korea already has a working one-gigabit-per-second fiber-optic network, and Google is currently testing a similar network in Kansas City. When that happens, viewers will not only have brilliant theater-quality screens; they’ll have an entire, instant 4K library to go with them.