The One Millionth Photo Taken from the International Space Station

Today in pretty space pics: Behold, the one millionth photo taken from the orbiting International Space Station. Snapped from one... 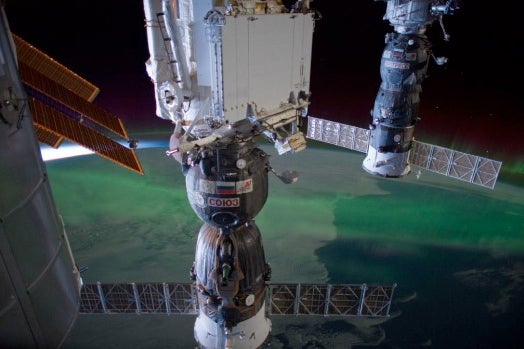 Today in pretty space pics: Behold, the one millionth photo taken from the orbiting International Space Station. Snapped from one of the lab’s windows as it cruises some 240 miles above our planet, the image manages to capture two Russian spacecraft (a Soyuz and a Progress robotic vehicle) in the foreground, a band of emerald green aurora swathing the Earth, and below that the Tasman Sea–proof that half of photography is a good vantage point.

Taken on March 7 (but only recently released), the image was posted by NASA astronaut Don Pettit and posted to Twitter, marking the millionth such photo snapped and cataloged by the crew there. The only problem: the crew has been snapping so many images that Pettit doesn’t know who to credit the photo to. He’s narrowed it down to himself and crew-mate Dan Burbank, commander of the Expedition 30 crew.