If you buy a cheapie laptop, you’re going to get onboard graphics–historically underpowered, since they exist on the same die... 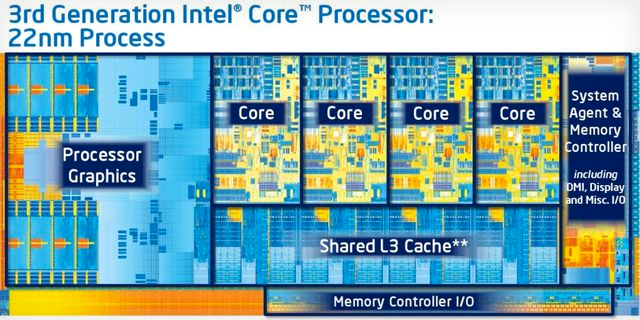 If you buy a cheapie laptop, you’re going to get onboard graphics–historically underpowered, since they exist on the same die as the CPU, and thus historically crappy. To play serious games, or do any real video editing, you’d need to upgrade to a discrete graphics card. But that looks like a thing of the past: today, Intel unleashed its new generation of processors, which go by the name Ivy Bridge, and what had seemed like an incremental upgrade actually has a pretty interesting element: these processors have onboard graphics that basically outclass the entire market of entry-level graphics cards. That means your next computer will be able to run games you’d never be able to run now–with no necessary hardware upgrades.

PCWorld has a good overview with a whole bunch of benchmarks, if you’re interested in seeing the specifics, but the basic idea is that Intel has placed a much higher focus on the onboard graphics capabilities, a focus continued from the current-gen Sandy Bridge line–so much so that they actually surpass the current crop of entry-level aftermarket graphics cards. (Otherwise these chips are focused mostly on size and power consumption rather than major new features or power.) That’s due to some careful internal restructuring of the GPU, according to PCWorld:

Intel has made enhancements to the GPU engine to improve efficiency, but other factors help to mitigate the clock-rate differential, too. First, the new HD 4000 GPU contains 16 execution units, versus the 12 built into Sandy Bridge. Second, Ivy Bridge supports DDR3-1600 memory, as opposed to the Sandy Bridge memory controller, which officially supports only DDR3-1333. Ivy Bridge gains 25 percent more parallel compute power and higher potential throughput due to the added memory bandwidth.

What we like here is that beyond all the wonkiness, the new chips have some big, obvious improvements for users. There are two levels of GPU, the HD 2500 and HD 4000. The latter will allow gamers to play graphics-intensive games like the new Metro 2033 and Just Cause 2 at playable framerates–definitely something that wasn’t possible before with onboard graphics. Both the 2500 and 4000 support DirectX 11 and three independent displays, too. And these chips will be everywhere: Mac, Windows, laptops, desktops, big power hogs, svelte ultrabooks. Everywhere. Which is great! And it also probably means you should hold off for a month or two if you’re shopping for a new computer.