DARPA Wants Humanoid Robots That Can Drive Tractors, Open Doors and Save the Day

DARPA is poised to launch a new Grand Challenge for a humanoid robot, according to robotics insiders — and the... 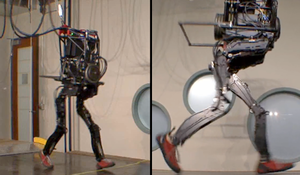 DARPA is poised to launch a new Grand Challenge for a humanoid robot, according to robotics insiders — and the result could be a souped-up metal soldier running alongside BigDog, driving an ATV, unlocking doors and clearing a path to safety for its human counterparts. There’s no official agency announcement yet, but robotics companies heard all about it at a recent industry day.

An official broad agency announcement is reportedly due soon, but here’s what we can expect, according to the robotics researchers at Hizook: A bipedal humanoid ‘bot that can climb in and out of a tractor or open-frame utility vehicle, drive it, get out, walk to a locked door, open it and go inside; then walk through a rubble-strewn hallway, climb a latter, find a leaky pipe, seal it and fix a broken pump. Wow. The robot will be remotely operated, at least in part, but DARPA also plans to introduce some communications latency so the robot will have no choice but to act on its own.

DARPA’s tall orders have previously resulted in some pretty amazing creations, from inflatable robots to the super-fast Cheetah, so it’s reasonable to expect that this challenge will yield some incredible results. Gill Pratt, who was part of the programs that led to ARM-H and Cheetah, among others, announced this new challenge at a DTRA Industry Day recently, reports Hizook’s Travis Deyle.

Given the challenge, the plan is to run this competition twice, one year apart. Either way this sounds pretty amazing.

There are a few early contenders, most likely PETMAN — watch him run below. But who knows what else engineers will come up with? Like Deyle, this magazine has wondered why American bipedal robot development has generally lagged behind our Asian counterparts. This could be a step in the right direction.