In a landing system test, Boeing just dropped its new space capsule from 11,000 feet above the Nevada desert, watching... 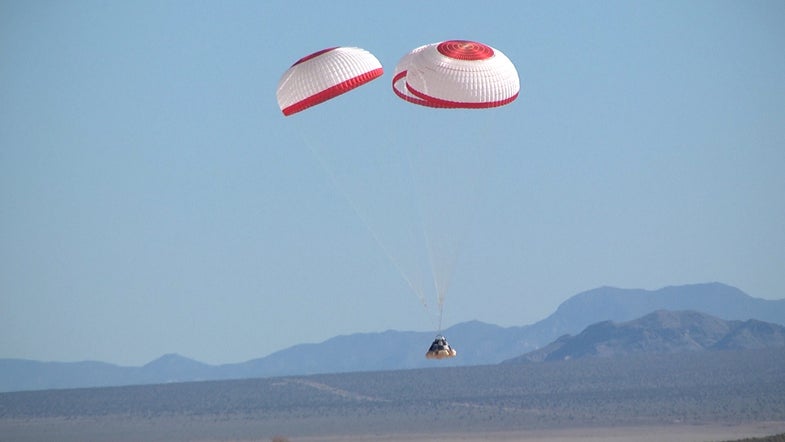 In a landing system test, Boeing just dropped its new space capsule from 11,000 feet above the Nevada desert, watching the Apollo-esque craft descend under three massive parachutes. The CST-100 (which really needs a catchier name) is now one step closer to flying to the International Space Station or a future space hotel.

Boeing attached a test version of the CST-100, which stands for Crew Space Transportation, to an Erickson Sky Crane helicopter. The chopper lofted the empty capsule to about 11,000 feet before releasing it, and then three main parachutes unfurled to slow its fall. Before the capsule landed, six airbags inflated to cushion the blow. It was the first drop test of all the future capsule’s landing components.

The aerospace giant makes no secret of the craft’s Apollo heritage — it’s even using its own Apollo-era re-entry and ocean landing data to tweak the designs.

Bigelow Aerospace paid for some of the testing, according to Boeing, punctuating the space destination company’s interest in using the CST-100 to get to orbit. Bigelow, the brainchild of hotelier/motelier Robert Bigelow, envisions using inflatable space stations as orbiting labs or other destinations, but the company doesn’t have a rocket, so it will need a partner like Boeing.

Boeing is planning another drop test later this month, after engineers check the parachute for any tears. The second test will use a drogue parachute on top of the main three. Plenty of other tests are scheduled for the rest of this year, the company said in a news release: A landing air bag test series is planned for May, as well as a forward heat shield jettison test and an orbital engine test fire in June.

And Boeing is not alone — several aerospace companies developing new spacecraft are planning to make progress this year, with a (possibly) upcoming launch of a SpaceX capsule to the International Space Station. 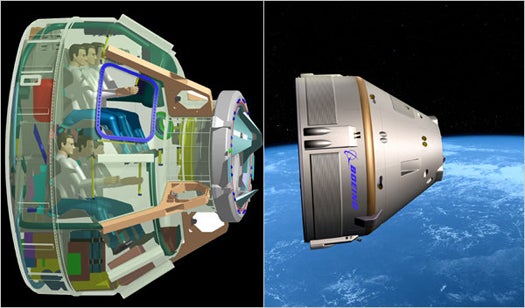 Boeing’s CST-100 Vehicle, As Rendered by an Artist