Did you know that bonobos have a “fascination with computers”? No? Neither did we. But a new Kickstarter project from... 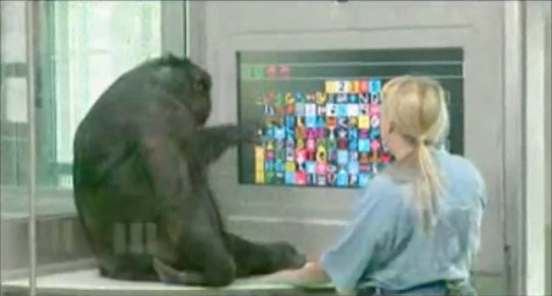 Did you know that bonobos have a “fascination with computers”? No? Neither did we. But a new Kickstarter project from the Bonobo Hope Great Ape Trust Sanctuary in Des Moines, Iowa needs funding to make every bonobo’s technological dreams a reality–from operating vending machines to, improbably, controlling their own robots.

The bonobos are apparently already pretty adept at recognizing and communicating through lexigrams, a language used by apes in which words are replaced by specific images (which may or may not have anything to do with the actual word). At the moment, the bonobos use a big interactive board filled with lexigrams, but in Iowa, the researchers want to give them the ability to move about and control their own environment, which means the bonobos need a portable version. Looks like they’re working on a version for Android Honeycomb–I see a Motorola Xoom pictured.

The app would give the bonobos the ability to control vending machines, interact with people on the go, play games (involving squirt guns, which, please give us video of squirt-gun-wielding bonobos), and for some reason, control robots with a terrifying bust of another bonobo. Imagine you get transported to some highly advanced alien planet and the aliens give you an unkempt, screaming mannequin on wheels to play with. That would freak me out, but perhaps this is one of the key differences between humans and bonobos!