Want to be the kind of person who causes entire rooms to fall silent when you enter? Researchers from the... 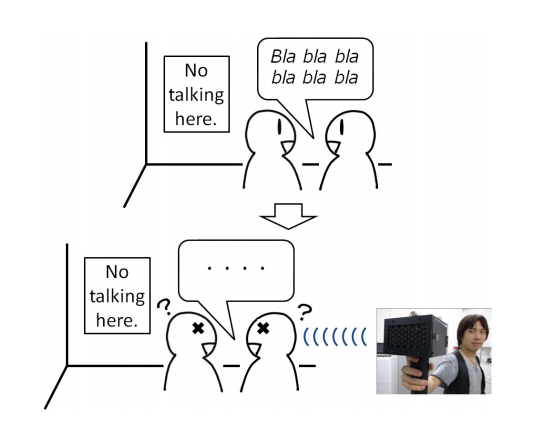 Want to be the kind of person who causes entire rooms to fall silent when you enter? Researchers from the National Institute of Advanced Industrial Science and Technology in Tskuba and Ochanomizu University in Japan have created a speech jamming gun that takes the words right out of speakers’ mouths using a clever trick of psychology.

Psychologists have long known that for whatever reason, it’s very difficult to talk when your words are being immediately repeated to you. Not annoying-younger-sibling repeated to you, but spit back at you just a fraction after you’ve spoken. So by using a simple directional microphone and speaker device, the researchers have created a handheld “speech jammer” that records what a person is saying and repeats it back at them with a two-tenths-of-a-second delay.

In tests, the researchers said the device works well at a distance, rendering the person at the receiving end without causing any physical discomfort (nevermind the mental discomfort caused by suddenly being rendered mute). The only limitation is that it only works with words; meaningless syllables like those often expressed by pirates or onomatopoeia don’t necessarily work.

The researchers see it as a tool to maintain order in meetings or discussion groups where someone is trying to dominate the conversation. But the commercial applications are virtually endless, as there are obvious applications for anyone who ever plans to get into a relationship with another human being ever.