How to Build the World’s Biggest Indoor Ski Run

Stockholm, Sweden, has plenty of cold, but not much in the way of snow or hills. So the members of... 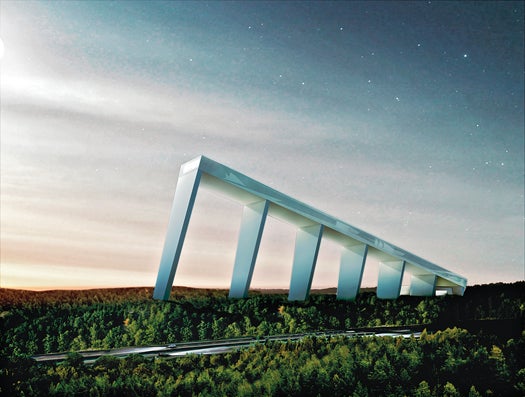 Stockholm, Sweden, has plenty of cold, but not much in the way of snow or hills. So the members of a Stockholm ski club convinced architecture firm Berg/C.F. Møller to construct the most energy-efficient indoor ski park in the world. Skipark 360° will be powered by sun, wind, water and heat from the earth.

SKI, SCHUSS, SHOOT, SLAP, SALCHOW
Skipark’s main slope will be the only indoor run in the world approved by the International Ski Federation to host World Cup slalom events. At 2,300 feet long and 165 feet wide, with a vertical drop of 525 feet, the bottom of the ski slope fans out and connects to an area that contains a 2.2-mile cross-country ski tunnel and a full-scale biathlon arena, complete with shooting ranges and a rink for hockey, bandy (Swedish hockey) and skating.

MINIMAL SUPPORT
Six tapered 180-foot-wide concrete pillars and crossbeams give the run an open feel—the structure is nearly transparent on its sides—and the design merges with a natural slope for the final 55 feet of the ski run.

LOW POWER
The arena is expected to consume around 10 million kilowatt-hours of energy a year, less than half of what most indoor ski parks use. It is cooled by two processes: actively converting solar or geothermal heat through adiabatic cooling, the way a refrigerator works; and passively, by opening its window walls on cold days, of which there are plenty in Sweden.

When it is completed in 2015, the ski park will use its airy construction to cool the facility on chilly days.
architecture
Sports