A future powered by hydrogen fuel, whose only byproduct is water, has long been an eco-friendly dream too difficult to... 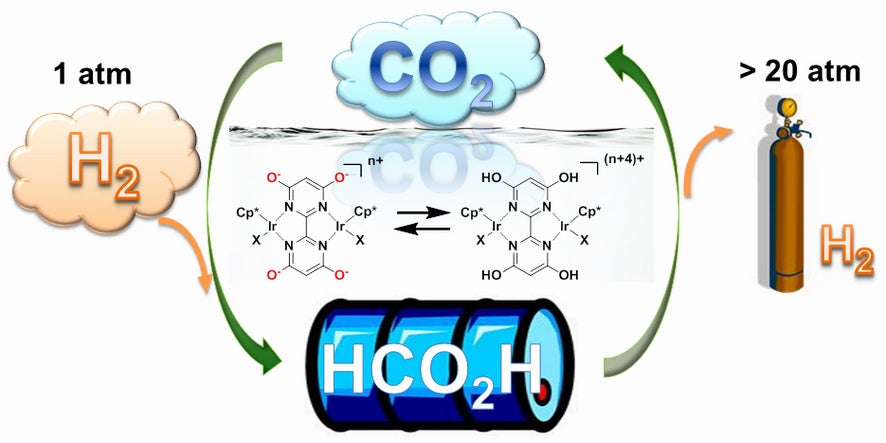 A future powered by hydrogen fuel, whose only byproduct is water, has long been an eco-friendly dream too difficult to realize. Storing and transporting hydrogen can be difficult and dangerous, and hydrogen production methods can also produce unwanted carbon dioxide. A new catalyst promises to solve these problems, using CO2 and hydrogen to store energy in liquid form. The only thing you need to worry about is pH.

It’s the first catalyst to combine hydrogen and CO2 at room temperature and pressure, using water as the liquefying solution. As such, it could use existing fuel infrastructure built for the liquid hydrocarbons we have been using since the dawn of the combustion engine.

In basic (as in alkaline) conditions, the catalyst converts hydrogen and CO2 into formic acid, a promising hydrogen-storage fluid that is safer to handle and transport than cryogenically stored dihydrogen. If you flip the pH switch to acidic, the resulting redox reaction frees the hydrogen from its carbon bonds, allowing you to grab and use the hydrogen for use in a fuel cell.

Scientists from Brookhaven National Laboratory and the National Institute of Advanced Industrial Science and Technology (AIST) in Japan worked with iridium-based catalysts with specific types of ligands, which are clusters of atoms surrounding the central metal atom. These ligands improve the catalyst’s ability to release protons. The researchers say they drew inspiration from nature’s catalysts — enzymes — and the way they move protons and electrons around inside biological molecules.

Under the right conditions, the iridium catalyst helps hydrogen react with CO2. The research team figured out the atomic structure of the catalyst to see exactly how it promotes this reaction. It worked extremely well, they say — they converted a 1:1 mixture of dihydrogen (the form you would want to use in a hydrogen fuel cell) and CO2 to formate, a form of formic acid, at room temperature. Then they increased the pH of the solution, and were able to regenerate the H2 at high pressure. There were no unwanted byproducts like carbon monoxide, the researchers say.

The paper was published online Sunday in Nature Chemistry.