During the dark sports month of February, when there’s nothing to watch but mid-season NBA games, sometimes I think about... 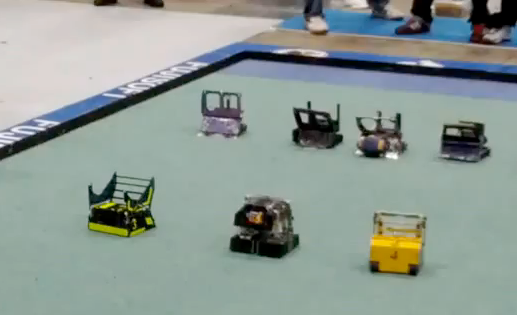 During the dark sports month of February, when there’s nothing to watch but mid-season NBA games, sometimes I think about the NFL draft. With so many long months to go before the NFL returns, it’s the only football-related thing I have, okay? But now I can look at this — some Japanese robots playing football!

It is not clear exactly what they’re trying to accomplish, though the tournament website says the rules follow the same ones as NFL football. It doesn’t look like it, but in any event it is fun to watch the robots scramble and fall all over themselves in pursuit of the small blue pigskin. One red robot grabs it and promptly, awkwardly fumbles, prompting other robots to flip into the air and attempt to recover it.

The tournament is for high school students in Japan and there are several regulations, including the height and size of the robots. They can’t weigh more than 6.6 pounds and are remote-controlled. It looks like pure chaos, but it also looks like fun.