A Tribute to the Fifty: A Nine-Story Forging Press That Can Benchpress a Battleship

At PopSci we’ve always got our eyes to the future, but every now and then we have to pause and... 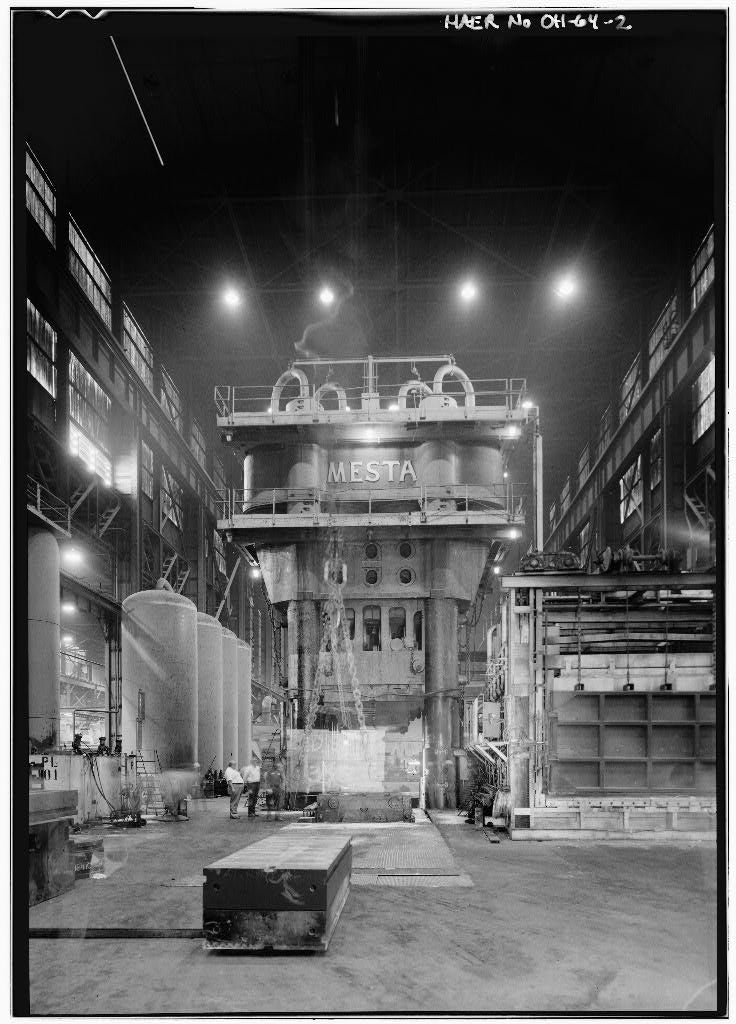 At PopSci we’ve always got our eyes to the future, but every now and then we have to pause and take a look back at the giants on whose shoulders we stand–especially when those giants stand nine stories tall, weigh 16 million pounds, and exert 50,000 tons of pressure. The Fifty–pictured above–is one of ten machines built in the 1950s as part of a U.S. government initiative called the Heavy Press Program, and it is to the HPP that we owe many of the large-scale trappings of modern life, including the Jet Age.

Described in detail over at The Atlantic (and further, with additional pics, at BoingBoing), the HPP followed on the heels of World War II and the allied discovery of the industrial processes that put Nazi jets into the air during an era when the best the Americans could muster were the effective yet technologically inferior propellor-driven aircraft like the B-29s, B-25s, P-51 Mustangs and the like that became icons of American wartime air power. After the war, the Soviets managed to get all the good German industrial hardware. So America built the Fifty.

These machines could press huge pieces of titanium into the super-strong, single-piece bulkheads necessary to construct the sturdy airframes needed to endure the stresses of supersonic flight. And they still can–the presses still operate to this day. The HPP spawned the American Jet Age, Tim Heffernan writes over at BoingBoing, and helped enable what would later become known as the military industrial complex. Say what you will about all that, but there’s no arguing this: these presses are truly magnificent machines. More pics and background over at BoingBoing.