We’ve seen the plasma beam toothbrush, where a blast of room-temperature plasma destroys plaque and bacteria in your mouth. Now... 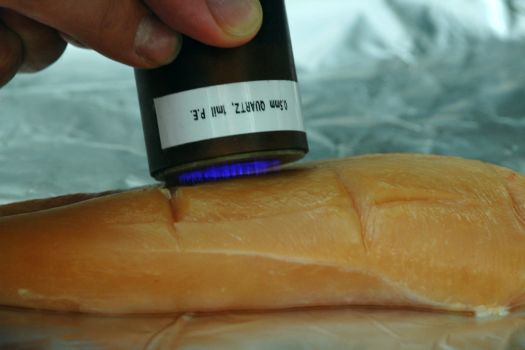 We’ve seen the plasma beam toothbrush, where a blast of room-temperature plasma destroys plaque and bacteria in your mouth. Now researchers at Drexel University have applied the technology to raw chicken and found that the gentle blue blast of ionized matter effectively removes pathogens on the poultry’s surface.

When raw chicken breasts had a normal amount of pathogens (Salmonella enterica and Campylobacter jejuni were the culprits that were tested), the plasma almost completely eliminated them. The technology is still too expensive to fit into the highly streamlined production lines that bring skinless, boneless, sanitized poultry to your table, but — not least because it is equally effective on antibiotic-resistant strains of bacteria — the proof of concept is an intriguing one.

The researchers suggest that the treatment could significantly increase the shelf life of raw meat by removing microorganisms responsible for spoilage. They don’t mention, though, the first idea that popped into my mind: delicious chicken sashimi.