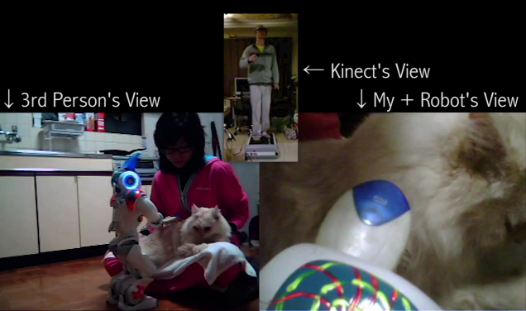 Telepresence is cool, but it’s currently not very versatile and–at least if you’re going the commercial telepresence robot route–pretty expensive. For a princely sum, you can remotely putter around a faraway office or home and communicate with people there via a computer terminal. Outside of that, the technology has yet to break down any serious walls. That is, until software engineer Taylor Veltrop devised a way to brush his cat remotely via a robotic avatar, spearheading what could be the biggest revolution in cat-grooming technology since that kitty brush that you wear like a glove.

In all seriousness, what Veltrop pulls off in this video is pretty amazing in that he doesn’t just create telepresence, but actually achieves tele-grooming. In other words, he translates his own bodily movements into action with his robotic avatar, and he does so with little more than some Wiimotes, a Nao research robot, a head-mounted display (HMD), and a Kinect–stuff that can be had off the shelf at relatively low cost.

In Veltrop’s setup, the HMD provides him with the robot’s viewpoint and also controls the Nao’s head and neck–whichever way the operator turns his head, the robot moves in kind. Wiimotes are used to control each hand, while the rest of the robot’s bodily movements are generated by cues picked up by the Kinect. So when Veltrop walks forward on a treadmill, the robot begins walking forward. If he turns sideways the robot rotates itself in place.

This is the kind of avatar-based telepresence that’s way cooler than simply piloting a bot around with your keyboard controls, and the kind of thing that could one day enable everything from remotely controlled robo-hospitals to robots that let users actually perform tasks at the office or lab–or on the battlefield even–from home (or vice versa).

But before we can have all that, we have to groom the kitty. Enjoy.