A Massive Solar Eruption, the Strongest in 7 Years, Has Earth Bracing for a Radiation Storm

There was a time when one rarely had to worry about incoming doom born of outer space, but that time... 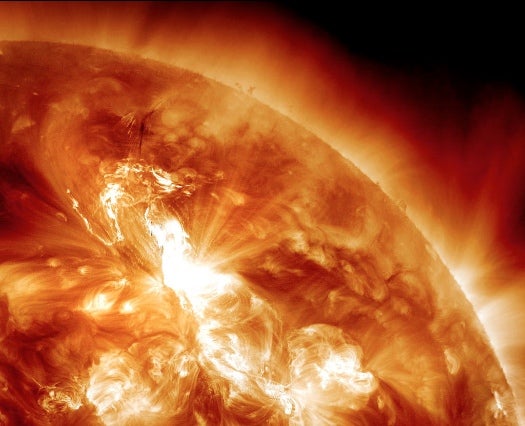 Just shy of 11:00 p.m. eastern U.S. time last night, NASA’s Solar Dynamics Observatory picked up a huge flash of ultraviolet energy resulting from a massive flare erupting form sunspot 1402. The storm was also picked up by the Solar Heliospheric Observatory (SOHO) and the Stereo mission, all of which contributed data to NASA and NOAA.

That data says that a burst of highly energetic particles known as a coronal mass ejection, or CME, is hurtling toward the home planet at a rate of about 1,400 miles per second. That burst of radiation isn’t expected to hit Earth squarely, but to deliver a glancing blow to the northern part of Earth’s magnetic envelope as early as tomorrow morning. That means people at lower latitudes may be in for some good auroras, but it also means there is some risk to satellites, communications, and aircraft.

Those threats aren’t thought to be all that serious at this time–NASA says the crew aboard the International Space Station is not in any danger, and NOAA officials say the resulting solar storm activity should be moderate. Still, polar flights on Earth are likely to be rerouted tonight and tomorrow until this latest storm has blown over.