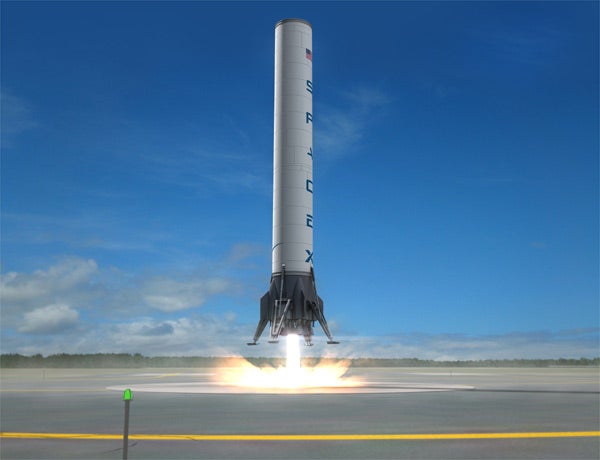 Commercial spaceflight venture SpaceX has been talking for a while now about reusing every part of its space launch system, from the optionally manned Dragon capsule (which is already reusable) to the rocket stages that it discards on its way to orbit. Via a new animation, the private space enterprise is showing exactly how this would happen, not via splashdown and recovery at sea like you might be thinking, but by vertically landing back at the launch site under their own power.

Right up front, let’s just note that we’re a bit skeptical. The scheme calls for the rocket stages to basically fly themselves back to the launchpad–using a series of small external jets to orient themselves–and then touch down gently using their main engines to provide enough reverse thrust to counter the effects of gravity. Even if the seriously delicate choreography required to guide a huge, falling, cylindrical rocket stage back to the launch site could be worked out, it seems like each stage would have to carry quite a bit of extra fuel to provide enough reverse thrust to gently set down at their point of origin.

That being said, we’re having a bit of trouble thinking of something SpaceX (and PayPal, and Tesla Motors) founder Elon Musk has put his money and mind behind that hasn’t enjoyed at least to some degree of success. And it’s probably safe to say that we’re not the only ones who have thought of aforementioned issues. But until we see it happen, let’s just say we’re guarded but enthusiastic about the idea.

We’re enthusiastic because if SpaceX can figure this out, they could drastically cut the cost of getting to orbit. And SpaceX isn’t even planning on stopping there. The company is determined to create a reusable system that can eventually launch regular manned missions to Mars.

That’s far out on the horizon. But in the nearer term, as New Scientist’s One Per Cent blog points out, a reusable rocket immediately brings the benefit of flight testing to the realm of space rocketry–that is, you can fly a rocket once or twice before you put people or expensive payloads aboard. That means SpaceX isn’t just setting a course for cheaper space access, but for safer space launches as well.