This transformer ‘bot is one of the more interesting and sort-of-creepy robots we have seen in a while — it can... 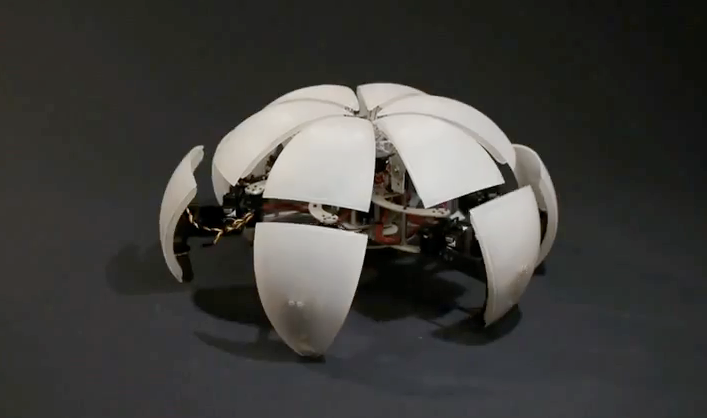 This transformer ‘bot is one of the more interesting and sort-of-creepy robots we have seen in a while — it can curl up in a ball and await a command, or unfold its servo-driven limbs and pick its way, crab-like, across a surface. It cannot roll yet, but we are actually OK with this, because there is something much more unsettling about a rolling robot that unfolds and starts to walk.

MorpHex is the brainchild of Norwegian engineer Kare Halvorsen, aka Zenta, who chronicles his robot-building experience on his blog. It started as a cut-up globe from Toys ‘R’ Us, and now it has 25 servos and a Basicmicro ARC-32 board, which is not yet programmed to roll. But Halvorsen said that’s his next step. Watch it fold up its arms into a sphere and then gently unfold them to walk.

It’s quieter and sleeker than this other DIY hexapod, and smaller than the albino Fraunhofer spider-bot, but somehow that makes it creepier. It’s especially weird to see it shut down when Halvorsen prods it with a stick …