Of all the uses for a robotic arm, flinging people around while they play with a virtual reality system has... 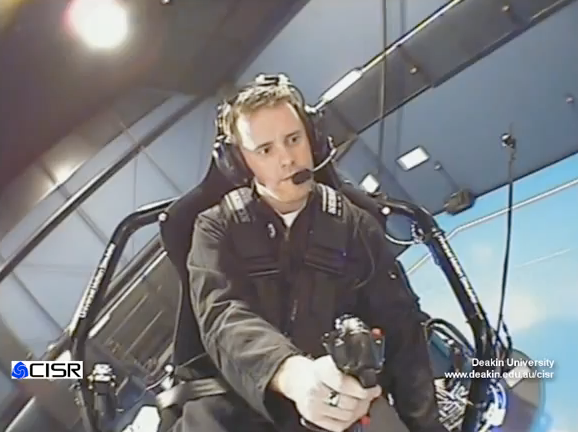 Of all the uses for a robotic arm, flinging people around while they play with a virtual reality system has to be one of the best. This immersive flight simulator can provide up to 6 G of force, giving would-be Top Guns a realistic notion of a dogfight.

It’s located at Deakin University in Australia, where it’s used to train military and police officers. The simulator uses several off-the-shelf technologies, including a Kinect-style motion capture and tracking system, an immersive 3-D visualization display, and the robot arm itself, a modified version of an industrial robot arm. The robot has six degrees of freedom, which allows for two axes of continuous rotation and a realistic G-force acceleration. While it’s optimal for flight training, it could also be used for simulating land-based vehicles.

The Formula 1 simulator robot arm we saw previously can also simulate fast motion, but not the G forces one would experience in a barrel roll maneuver.

“No other simulator can provide the full experience of flying a military jet with all the gut wrenching G-forces while only seven meters off the ground,” said Professor Saeid Nahavandi, Director of the Centre for Intelligent Systems Research at Deakin. Imagine playing MW3 with this thing…