Today in pretty space pics: the asteroid Vesta, captured in all its multicolored glory by NASA’s Dawn spacecraft. The colors,... 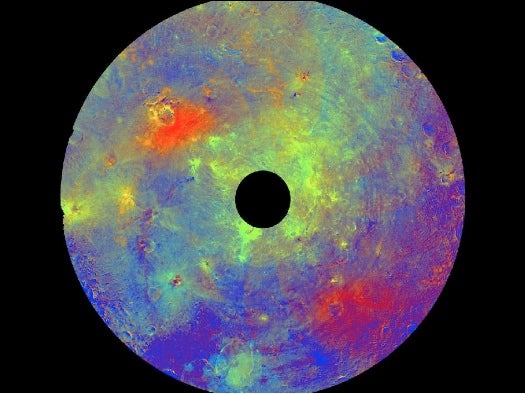 Today in pretty space pics: the asteroid Vesta, captured in all its multicolored glory by NASA’s Dawn spacecraft. The colors, of course, aren’t true. Rather, they’ve been assigned by scientists to show different mineral and rock types as data streaming back from Dawn is informing the analysis of this unique asteroid.

Vesta is unique because astronomers believe it lives in a grey area between the terrestrial inner planets and the average rocky asteroid–hence, the wild coloration you see above. Rather than being one-note, Vesta exhibits a varied composition marked by well-defined layers and ingredients. Dawn’s visible and infrared mapping spectrometer show that Vesta contains pyroxene, a rock-forming ingredient also present in things like iron that is also very much present in the Earth’s upper mantle. And the dispersion of minerals indicates that rocks on the surface cooled quickly while lower layers cooled more slowly.

All that points back to the prevailing idea that Vesta is more like a planet than your average asteroid, with a layered composition like that of the Earth’s: core, mantle, crust. That’s pretty cool for an asteroid. And in case you were wondering, the black hole in the center of the image is simply data that has been omitted because of the angle between Vesta, the sun, and the spacecraft. Get your wallpaper-sized version of the above over at NASA.