Comet Lovejoy, as Seen from the International Space Station

Today in pretty space pics: Comet Lovejoy, still alive and heading back out toward the far reaches of the solar... 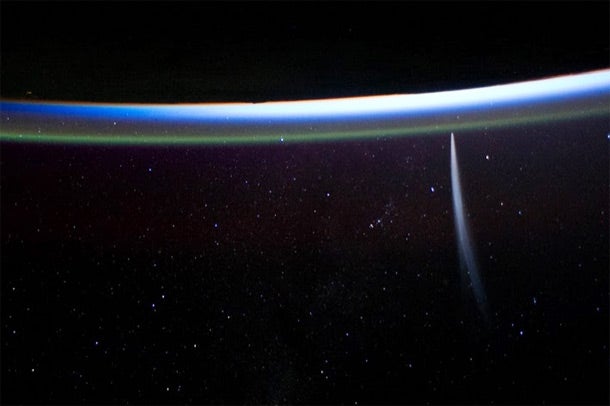 Today in pretty space pics: Comet Lovejoy, still alive and heading back out toward the far reaches of the solar system, as seen from the International Space Station. This photograph was snapped yesterday as the ISS passed over Australia by Dan Burbank, one of the station’s current crew members. And needless to say, it’s one of those once-in-a-lifetime shots.

What you’re seeing in the top of the shot is actually the dark side or our dear planet, with the lit up arc traversing the image being Earth’s atmosphere, backlit by the sun (the thin green line is the upper atmosphere, where energized particles are tickling the edge of space). And of course, there’s Comet Lovejoy, which narrowly escaped a flyby of the Sun last week and came out not so worse for wear on the other side. Burbank managed to capture it from the ISS just as it was darting behind the home planet on its way back out into interplanetary space.

Click through to Bad Astronomy for a quick primer on comets, Lovejoy, and the two tails–yes, there’s actually two–that you’re seeing here. And, as always, the Bad Astronomer has links up to the larger version of this pic, should you feel the need to take a closer look. And you should.