The Northernmost Dish In The World: Tracking Satellites and Dodging Polar Bears

Sten-Christian Pedersen oversees the northernmost antenna array on Earth, 25 dishes tracking about 100 satellites on the small archipelago of... 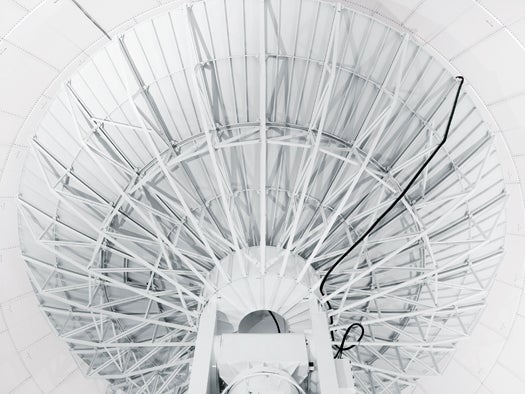 Sten-Christian Pedersen oversees the northernmost antenna array on Earth, 25 dishes tracking about 100 satellites on the small archipelago of Svalbard, 500 miles south of the North Pole. Even when the winds are –76°F and visibility is 10 feet, Pedersen drives to the satellite station. When there is a risk of avalanche, he takes a helicopter. When there are polar bears, he carries a firearm.

Pedersen says the antennas are protected by “radomes: close to a drum skin, but made out of plastic.” Under the radome is the dish, a lattice of supports with four motors in its base; when the dishes move, it is barely discernable. Svalbard Satellite Station tracks polar orbits—satellites make a complete lengthwise circuit of the globe every 100 minutes, 14 times a day. In 25 days, a polar-orbiting satellite will have seen the whole surface of the Earth.

As a satellite passes overhead, SvalSat’s technicians have 12 to 15 minutes to download its data at 300 megabytes a second. The data (images, mostly) is then sent through fiber-optic cables in concrete tubes aboveground (permafrost prevents burial), before it reaches an undersea cable connecting to northern Norway. A new satellite named NNP, a weather satellite, just launched. Pedersen says that the station is in “freeze, to minimize any risk of a problem.” His week has been an easy one. The sun recently set for the last time until mid-February. “Then,” he says, “you will start to see small light from the south. The blue season, we call it.”