If you're missing a space ball, please contact Namibia 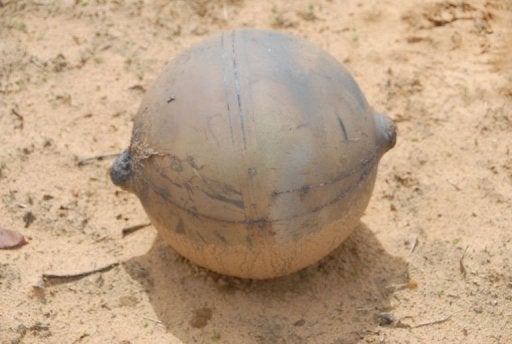 A large metallic ball has fallen from the heavens and landed in a remote region of Namibia, spurring a lot of speculation about its origins and spurring local authorities to get NASA and the European Space Agency on the horn. No one is sure where the hollow metallic object came from, but it definitely came down hard–it was found 60 feet away from its landing site, a hole more than a foot deep and 12 feet across.

Made of a “metal alloy known to man,” the 13-pound ball is about 43 inches in circumference and landed roughly 480 miles from the Namibian capital of Windhoek. And it turns out it’s not alone. Apparently several similar objects have fallen across the southern hemisphere (in Australia and Latin America as well as elsewhere in Africa) over the past couple of decades.

So far, it has not exploded, hatched, or started to glow with a faint, eerie white light. Nor has anyone descended from the sky looking for it. If that happens, we’ll be sure to post something about it here.