Italian Mathematician (Maybe, but Probably Not Really) Explains Away Dark Matter With Math

An interesting piece in Universe Today over the weekend takes the dark matter out of the hunt for dark matter,... 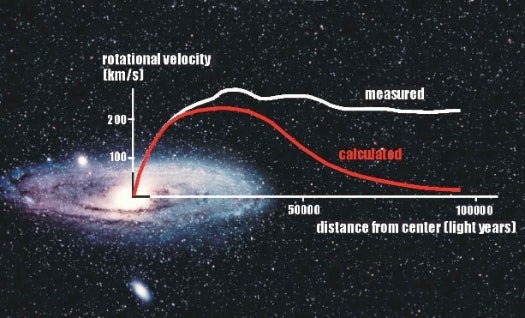 An interesting piece in Universe Today over the weekend takes the dark matter out of the hunt for dark matter, but you’re probably going to want to approach this one carefully–or as Universe Today says, “put on your skeptical goggles and set them to maximum.” An Italian mathematician has done some creative number crunching and accounted for the force that holds galaxies together without the need for dark matter. It’s a bold claim to make–and one that’s going to get a good going-over from physicists.

A quick dark matter primer, for those who might be rusty: basically, if one is to simply tally up the amount of mass in spiral galaxies like our own and then model their rotation, we get a very different picture than the one we can empirically observe. The amount of mass at the center of spiral galaxies is huge, but outer stars move around the galactic disks so quickly that they should–according to the numbers–fly off into interstellar space. In fact, the visible objects at the Milky Way’s center only contain about 10-20 percent of the mass needed to explain the rotation curves of the outer stars–and to keep the galaxy from coming unglued around the edges.

So, by deductive reasoning, modern physics has concluded that the rest of the mass holding galaxies together is invisible–it’s dark matter. This is the stuff of Nobel prizes and very expensive orbiting scientific experiments. And now this guy Carati is mucking up the works with his numbers.

But the thing is, his math fits the models almost perfectly. Carati essentially says that–somewhat implausibly–the rotation curves can be explained by the influence of faraway matter on galaxies. It sounds pretty nonsensical–intuition says any gravitational influence exerted from outside the galaxy should help to pull the galaxy apart, not hold it together.

But apparently his math fits really well with what we can observe of galactic rotation (note: we’ve personally taken exactly zero steps to check Carati’s math ourselves, but this is what we’re told). It’s an extraordinarily close fit actually, and he’s shown that it works for at least four known galaxies. Which has led Steve Nerlich at Universe Today to outline the following four possible conclusions (and we’re quoting here):

• There are so many galaxies out there that it’s not hard to find four galaxies that fit the math;
• The math has been retro-fitted to match already observed data;
• The math just doesn’t work; or
While the author’s interpretation of the data may be up for discussion, the math really does work.

Like Nerlich, we’re dialing up our skeptical goggles to “ludicrous skepticism.” The idea that much of what we understand about physics is being explained away with some clever yet seemingly counterintuitive calculations doesn’t seem likely. But it’s an interesting notion nonetheless, and sometimes big science happens this way. More about Carati’s math over at Universe Today, and the paper is at arXiv.