Jot it down: November 15, 2011, is when it began. Researchers in France have given a small robot the ability... 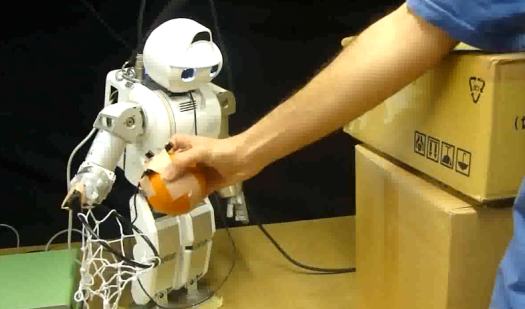 Jot it down: November 15, 2011, is when it began. Researchers in France have given a small robot the ability to directly control a living human’s arm by running electricity through his muscles. The evil little bot mercilessly forces blindfolded human test subjects to put a toy ball through a toy basket again and again, by stimulating electrodes attached to their arms.

The researchers have some story about how it’s for therapeutic purposes — a robot can use this ability to help a paralyzed human — and also that co-opting human limbs is more cost-effective than building expensive, carefully engineered robot limbs.

October 19, 2021: Robots of Canada send an army of slave humans against the United States.

Watch the video, and tremble.