Today in pretty space pics: Behold, the Carina nebula–but not as it looks with the naked eye. Astronomers at the... 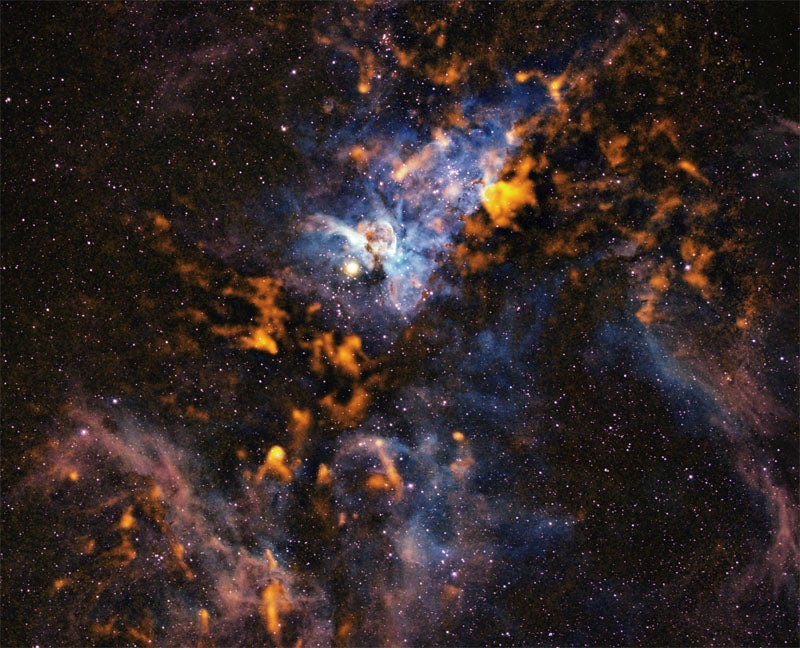 Today in pretty space pics: Behold, the Carina nebula–but not as it looks with the naked eye. Astronomers at the Atacama Pathfinder EXperiment (APEX), unsatisfied with the visible light spectrum images taken of this stunning swirl of blue interstellar dust, decided to begin imaging the region in sub-millimeter light invisible to the eye (represented by the the orange in the image above). Aesthetically speaking, it wasn’t a bad idea.

Scientifically speaking it wasn’t too shabby an idea either. The sub-millimeter analysis shows light emissions from dust warmed by the UV and visible light from the young stars that are forming here. These are actually some of the most luminous and massive stars in the galactic neighborhood, giving astronomers a glimpse into the interactions between these clouds of star-forming gas and some of the most extreme stars in our galaxy.

The APEX observations are seen in orange here, while the underlying image was snapped in visible light by the Curtis Schmidt telescope at the nearby Cerro Tololo Interamerican Observatory in Chile. For some rough perspective, Carina is one of the brightest nebulas in our sky, way brighter than the better-known Orion nebula, which is much closer to Earth but appears to be the same size as Carina in the sky. That’s because even though the Carina Nebula is some 7,500 light years away, it contains stars with a mass equivalent to 25,000 or our suns and gas and dust with a mass of another 140,000 suns.

In other words, it’s massive. But even with all those suns, Carina manages to be quite easy on the eyes. More at SPACE.