Phobos-Grunt, Still Stuck in Orbit, Could Burn Up in the Atmosphere in January

A brief window remains to rescue the craft 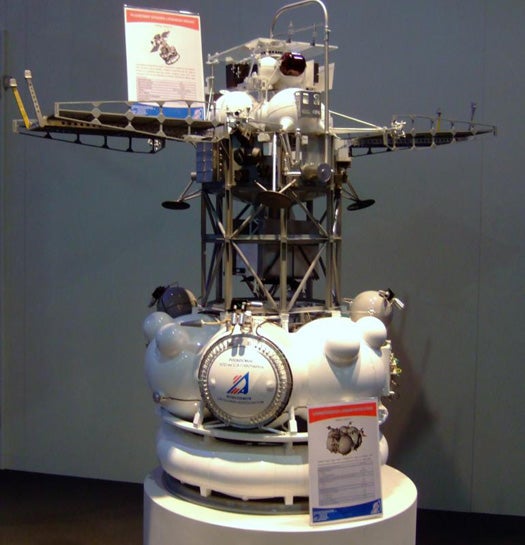 It’s now been almost a week since the launch of Russia’s Phobos-Grunt spacecraft, and still mission handlers have received no communication from the interplanetary probe which has been stuck in Earth orbit since launching last Tuesday. The head of the Russian space agency Roscosmos says that the mission is not yet lost, but the window is definitely closing. In the early days of December that window will close completely, and if it does the spacecraft–which includes China’s first Mars satellite–will likely burn up in Earth’s atmosphere in January.

Phobos-Grunt is Russia’s most ambitious interplanetary mission in more than a decade, and thus far it is topping a long list of failures for Roscosmos’ interplanetary ambitions. It was supposed to travel to Mars’ moon Phobos–dropping off China’s Yinghuo-1 into Mars orbit along the way–where it would study the Martian moon and gather samples for delivery back to Earth by 2014.

Instead, it launched into Earth orbit and failed to initiate a couple of booster firings that would have lifted it from orbit and sent it on its way to Phobos. Roscosmos engineers worked through the weekend to re-establish communication with Phobos-Grunt, obtain some telemetry data, and reprogram the spacecraft to initiate its burns and get back on track toward Phobos. So far, no dice.

There are now precious few days to save the mission. If Roscosmos fails, the spacecraft’s orbit will decay as it slows, bringing it back to Earth sometime in January. However, scientists are confident that none of the pieces of Phobos-Grunt would hit the ground in such a scenario. Rather, the spacecraft will burn up as it re-enters the atmosphere just a couple of months after launch–all $65 million of it.