In a potential breakthrough for cryptography, a new laser light-scattering technique could be a fast and efficient way to generate... 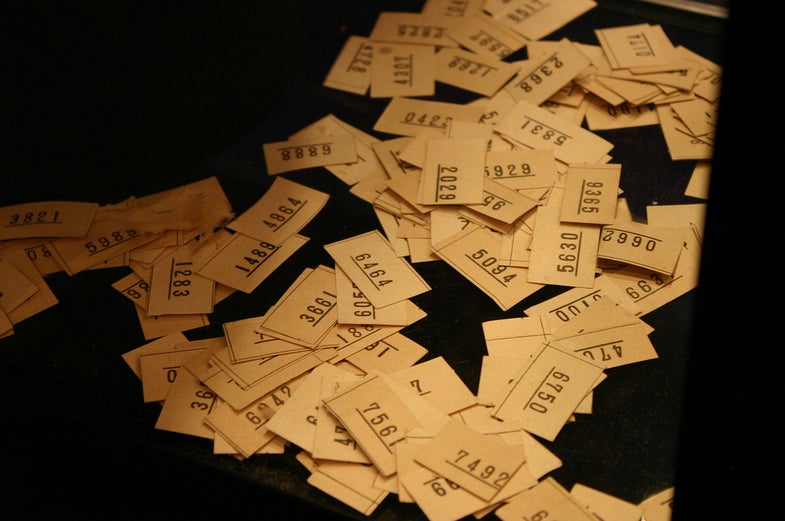 In a potential breakthrough for cryptography, a new laser light-scattering technique could be a fast and efficient way to generate truly random numbers, creating unknowable code formulas that will be able to thwart even the most sophisticated hackers. Led by Canadian researchers, the new method relies on the bizarre characteristics of quantum uncertainty.

Empty space is really anything but — it’s actually filled with particles and anti-particles that spontaneously pop in and out of existence. The uncertainty principle holds that they are everywhere at once, except when they are observed, in which case they are in the place where they’re being observed. These virtual particles can be harnessed as a reflecting source, bouncing photons that are then changed by nature of their interaction with these unknowable, ineffable things.

Ben Sussman at the National Research Council in Ottawa works with a laser pulse lasting a few trillionths of a second, and shines it at a 3-mm piece of diamond crystal. The interactions with vacuum fluctuations changes the incoming photons, whose signals are amplified and converted into binary to generate random bit sequences, according to an NRC news release. It works very quickly, Sussman told the Ottawa Citizen.

“This has the potential to scale to extraordinarily fast rates, which is becoming more and more important as information networks expand and there are higher data rate requirements,” he said.

Random numbers are used as cryptographic keys for a variety of applications, from militaries to lotteries to banks, but true randomness is very hard to achieve. Any algorithm or device that generates a number is actually deterministic in some way, so technically they can’t make a really random number. Algorithms have logic rules and inputs, and even dice are governed by the laws of physics, for instance. So quantum fluctuation numbers, which are truly uncertain, are an ideal solution.

Other researchers have tapped quantum uncertainty to build truly random sequences, including a Chinese team that used quantum noise last year to introduce small frequency changes in laser light. Their method achieved 300 megabits per second of random data, pretty fast but still not great compared to modern bit-rate requirements. Sussman says his method is much faster, capable of producing gigabit-per-second random data. So far, its speed is limited by technology, he said.

The work is published in the journal Optics Express.