A new, compact gasification contraption can dramatically compress the things our armed forces leave behind, turning trash into ash. Marines... 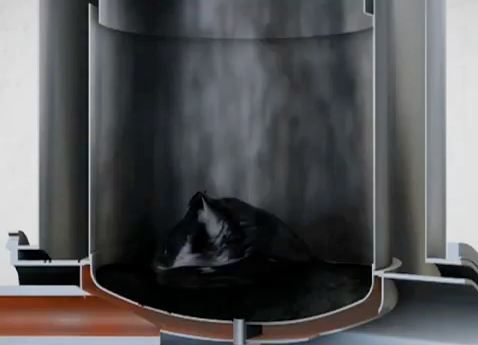 A new, compact gasification contraption can dramatically compress the things our armed forces leave behind, turning trash into ash. Marines at Camp Smith, Hawaii, are testing the new unit to verify whether it could be used at forward operating bases to cut down on landfill. The Micro Auto Gasification System, or MAGS, can bake 100 pounds of garbage and compress it into 5 pounds of ash, while creating more energy than it consumes.

It could someday handle the daily waste needs of 1,000 Marines at a forward operating base, according to the Office of Naval Research.

The system uses a controlled pyrolysis process, which gasifies garbage in a contained, sealed drum. The system will accept any kind of organic material, from food waste to plastic. Temperatures in the drum reach 1,300 degrees F, and chemical reactions yield a gaseous mixture of carbon monoxide, hydrogen, carbon dioxide and methane, which is itself combustible. The system recycles this mixture to further the process and sequester the gases. The result is a small pile of inert ash that can be thrown away, and any glass and metal pieces are left intact to be recycled.

The material doesn’t burn in the traditional sense of the word, so there are no carbon emissions, which is both good for the environment and good for expeditionary forces who don’t want plumes of burning garbage smoke to give away their positions.

Gasification in and of itself is not a new idea, but the MAGS’ small scale and easy operation is unique. Terragon Environmental Technologies Inc., based in Montreal, developed the MAGS system in conjunction with the Office of Naval Research and the Canadian Department of Defence. Its ideal use would be for naval vessels, shore facilities and isolated areas like FOBs that need to cut down on the size and scope of garbage. Learn more about this in the video below.

Eight Marines tested it for two weeks in Hawaii and were apparently pleased with the results. Testing is scheduled to continue at the U.S. Marine Corps Forces, Pacific (MARFORPAC) through March, and next summer the Marines will test its portability.

Lt. Col. Mike Jernigan, a Marine combat engineer who recently commanded a logistics battalion in Afghanistan, said in a statement that battlefield waste disposal is a problem. Marines have to be sure their waste disposal practices don’t leave anything of value behind, and that someone scavenging through it would not be harmed.

“Right now, there are really only two solutions: burn it or bury it,” Jernigan said.

Now they can add “bake it” to the list.