Never get out of bed again 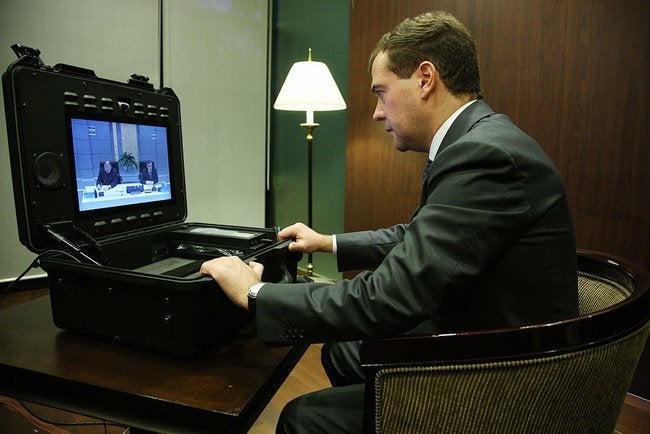 Talking via a telepresence robot can be a great way to participate in activities when you can’t be physically present, but these systems are expensive, can be tricky to use and aren’t really designed for spontaneity. And despite what modern meeting-tacular schedules suggest, some of the most productive discussions in an office take place randomly, via subtle personal communications. To deal with this, Bell Labs is working on cheap, simple telepresence camera systems that can give remote participants a more pronounced physical presence.

A proposed design, called “Nethead,” involves a cheap camera and display mounted to a set of robotic shoulders that swivel around in accord with a person’s head movements. This would help facilitate turn-taking in meetings, according to Bell Labs research director Jan Bouwen — if two people start talking, they tend to take their cues from who has more attention from the group. With a swiveling shoulder, remote participants can take part in this favoritism.

The shoulders can also make it clear whether a remotely located person is paying attention, disagrees with what’s being said, or is confused, Bouwen says, in an interview with IT News. It would also be considerably cheaper than other telepresence and video-conferencing systems, which can cost tens of thousands of dollars.

Along with bringing body language to virtual meetings, Bell is studying the use of virtual thought bubbles. Applications can capture what a person is doing — reading something, sending e-mail or talking on a phone — and move a virtual avatar accordingly. Say you’re just fiddling on e-mail — your avatar might move to a public space to indicate you are available for a chat, as IT Wire explains it. Or maybe you’re reading something and don’t want to be disturbed — the system will put your avatar in a library.

Of course, these systems would make it more difficult to mask your distractions or other undesirable states of mind. Maybe it would be better to stick with a creepy larval robot, so that your fellow meeting-goers are too disturbed to pay you any attention.

[IT News via Slashdot ]