We have been enjoying plenty of BigDog/AlphaDog videos of late, showing off the Marines’ sure-footed four-legged robot. Well apparently the... 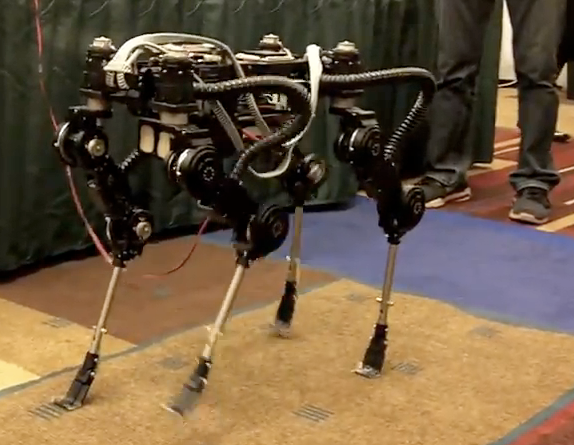 We have been enjoying plenty of BigDog/AlphaDog videos of late, showing off the Marines’ sure-footed four-legged robot. Well apparently the U.S. isn’t the only country planning to build a pack of quadruped bots. Check out this small South Korean robot dog, prancing quietly around a trade show.

South Korean firm SimLab is building the robot and testing simulation software on it to help the robot gain more ambulatory autonomy. It’s still a little wobbly, as the video shows. It doesn’t go backward, but then most flesh-and-blood animals don’t, either. The video is from the IEEE’s International Conference on Intelligent Robots and Systems last month.

IEEE Spectrum says the South Korean government is sponsoring a taller version, and this little fella is being used as a proof of concept.