Video: You Can Buy This Anime-Inspired Yet Very Human-Like Robotic Head

Finally, a humanoid head that's almost cartoonish enough to not creep us out 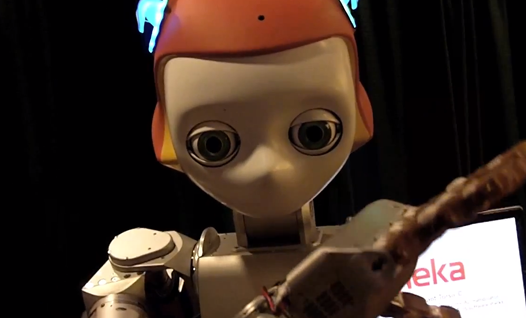 San Francisco-based Meka Robotics wants to make robots that are human-safe and human-scale, but their new S2 humanoid head is more anime than animal. And that’s not necessarily a bad thing. Mechanically, it’s a marvel: seven degrees of freedom, zero-backlash gearing in the neck, high-res cameras in each eye, and eyelids that move with the fluidity of the real thing. All that adds up to extremely human-like motions and gestures that are so real you might just want to give the robot a hug.

Which is perfectly fine, says Meka co-founder Aaron Edsinger, as the entire robot was designed to safely work in close proximity with humans. That means imbuing the ‘bot with a sense of force in all of its moving parts so it knows when it has come into contact with something or someone.

IEEE Spectrum caught up with Meka, Edsinger, and the S2 head (atop Meka’s torso and arm assembly) recently at the Intelligent Robots and Systems (IROS) conference in San Francisco and shot some great video of Meka’s tech in action. See it for yourself below.